The Coquitlam Express completed their second sweep of a home and home with the Langley Rivermen with a convincing 7-2 win Saturday night in Coquitlam.

The win was the 5th in 8 regular season games with Langley this season. In fact the Express took 5 of the last 6 meetings between the two teams.

It was a second straight outing where the Express got offense from throughout the lineup. But this time, Corey Mackin, Brett Supinski and Brendan Lamont left a bigger imprint on the scoresheet when the night was done compared to the night before.

Like Friday the Express opened the scoring before the game was three minutes old. Former Rivermen Brendan Gulka drove the puck to the net and Michael Merulla was able to jam the puck home from under Rivermen goaltender Bo Didur. Didur wasn't particularly happy with the length of time that Merulla was allowed to prod at the puck. That was the first of a number of times that Didur would be aggravated with the Express when they were around his crease.

The Rivermen equalized just over six minutes later as Ben Butcher from the left wing would snap a shot through the legs of Brayden Krogfoss to tie the game at one. That would be the only puck to get past him in the first period as Krogfoss finished with 13 saves on 14 Rivermen shots in the first period. 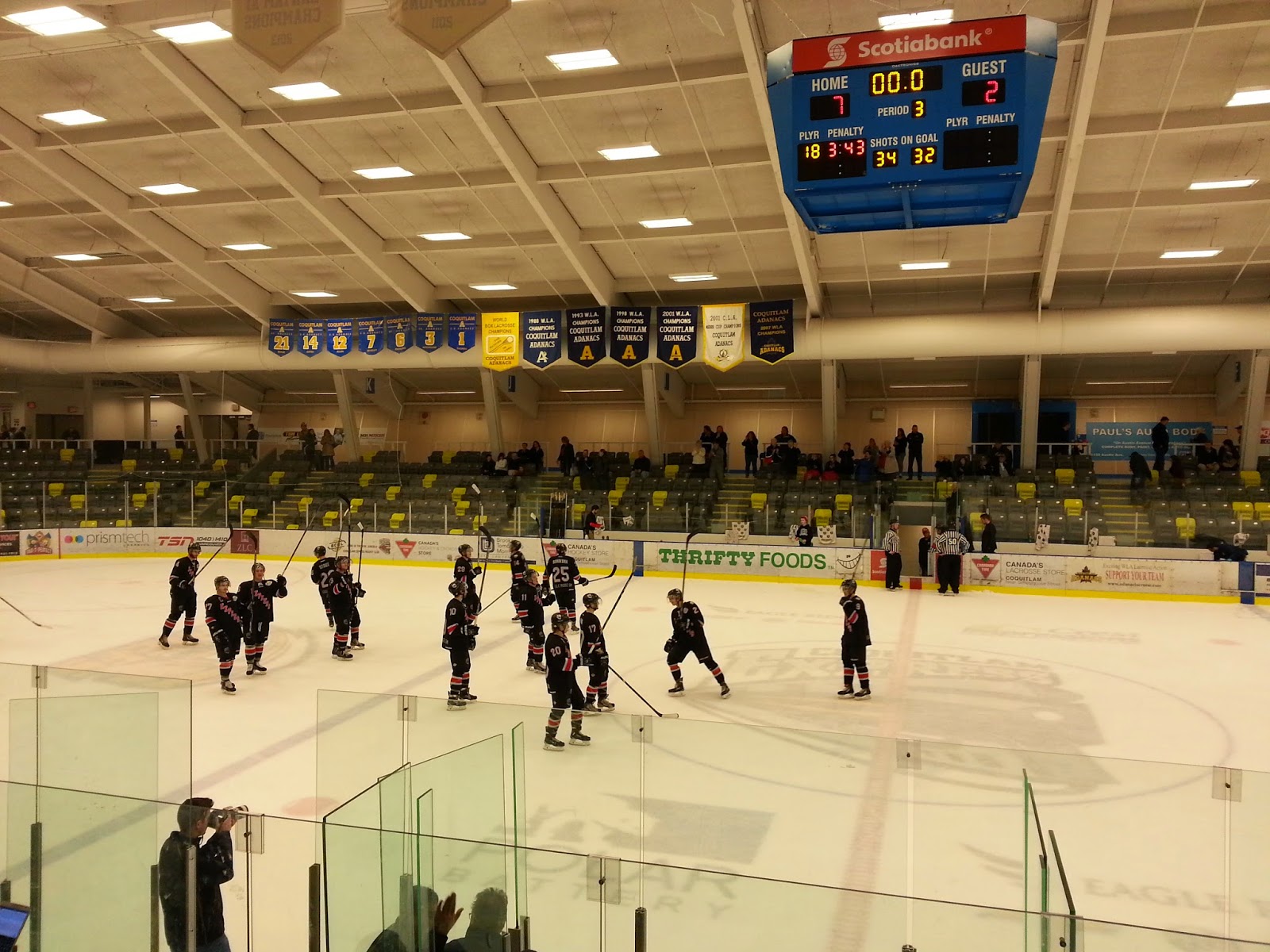 Late in the first period with the Express shorthanded Corey Mackin found himself finishing off a play of the highlight reel variety. But it wouldn't be Mackin's play that left people in awe. It was the lob pass by defenceman Nic Coltura who lifted the puck in the air from his own zone and that allowed Mackin to skate underneath it and pick up the puck as it fell to the ice and the BCHL scoring leader snapped home his BCHL leading 9th shorthanded goal of the season on a breakaway for a 2-1 Express lead all the while adding to his Express record in that category.

Colton Kehler even things up at two in six minutes into the second period with a wrist shot that beat Krogfoss on the short side.

It was at this point the Express began to take over the game. Colton Kerfoot gave the Express the lead for good less than three minutes later as he snapped home a pass from in front of the net by Joey Santucci. The goal was the third different line for the Express to score.

With the Express in the lead for the third time in the game, the line of Mackin, Supinski and Lamont took care of things for the rest of the night.

Brendan Lamont scored his third goal in his last two games right off an offensive zone face-off for a 4-2 Express lead entering the third period.

In the third period former Langley Rivermen Brendan Gulka dropped the mitts with Jordan Schneider and the two had a very good scrap with each combatant landing some very solid shots.

I might be making a mountain of a molehill (but I'm in the media it's what I do) the reaction of the Express bench following the fight stood out to me to see all the Express bench standing and banging their sticks on the boards for an extended period of time.

The BCHL may have the one fight rule now and players really have to pick their spots knowing the consequences of fighting and because of that rule you have wonder how much of a boost fights can still have on a team's in game morale, but this fight certainly had a uplifting effect on the Express bench and it carried them the right of the night.

The opposite effect even though the fight was pretty even saw the Rivermen begin to loose their composure.

A few minutes later Hunter Anderson was assessed a slashing penalty which was followed by an ejection for Rivermen Head Coach Bobby Henderson 20 seconds later after he continued to voice his displeasure.

On the ensuing 5 on 3 Corey Mackin scored his second of the night and 48th of the season banging home a loose puck at the side of the Rivermen net.

Just over two minutes after that Brett Supinski picked up the puck in the neutral zone and raced into the Langley zone snapping home a shot in off the post for his 90th point of the season and a 6-2 Express lead.

It was another moment to put the seasons that Mackin and Supinski are having and put it in context where they stand in Express franchise history. It was just the second time that two Express teammates had totaled 90 points in a season. The last time was Kyle Turris and Tyler McNeely who each had over 100 points in 06-07.

Brett Supinski finished off the scoring blasting home a set up on the slot on another 5 on 3 for the Express and a 7-2 lead. The line of Mackin, Supinski and Lamont combined for 5 goals and 5 assists for 10 points. 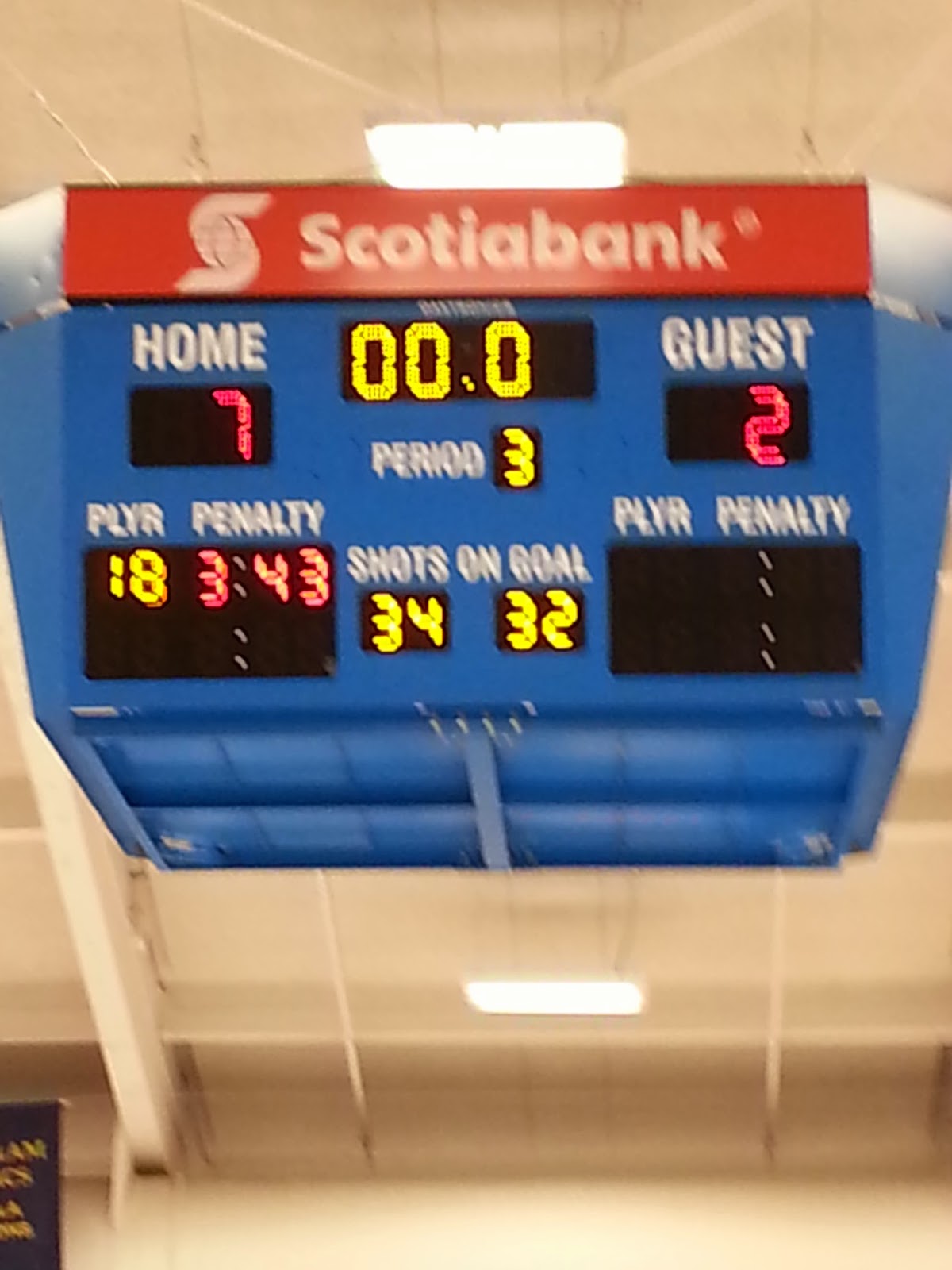 Corey Mackin now sits with 48 goals on the season and 98 points. Supinski has 44 goals and 91 points. The nearest non Express player in the scoring race is Dane Gibson of Victoria with 79 points and just two more weekends of action remaining. I'm officially declaring the BCHL scoring race over and Corey Mackin and Brett Supinski are the first teammates to finish 1-2 in BCHL scoring since Vic Sharma (101) Brent Dodginghorse (94) of theVernon Vipers in 96-97. Brendan Lamont is 13th in BCHL scoring with 23 goals and 58 points through 54 games. (Are you reading this Mike?)

It easy to overlook a few things in this game with the final score being what it is. But Brayden Krogfoss quietly had a very solid outing turning aside 32 of 34 shots for his 5th win of the season. And the penalty killing had a perfect 5 for 5 night. It was the first time this season that the Express had prevented Langley from scoring a power play goal.

The win was also the 6th straight for the Express on home ice. They will look to extend the streak to 7 when they host Surrey Wednesday night. Then Cowichan Valley is in Coquitlam on Friday night.