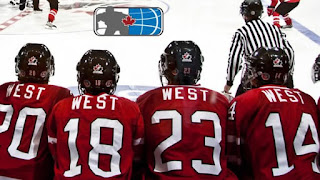 Express forward Blake Hayward has made the cut and will play for Team Canada West at the upcoming World Junior A Challenge. Captain Jackson Cressey unfortunately didn't make the team.
Click here to view roster

Hayward (98) is in his first full season in the BCHL with the Express. He has 3 goals and 7 points in 29 games this season. This will be his first opportunity to play at the World Junior A challenge which will take place in Coburg and Whitby Ontario from December 13-19. The first game for Team Canada West will be on the 13th vs Czech Republic Click here for schedule

Express Head Coach and GM Barry Wolff will serve as an assistant coach for Team Canada West. He previously served in that role at the 2010 tournament in Penticton.