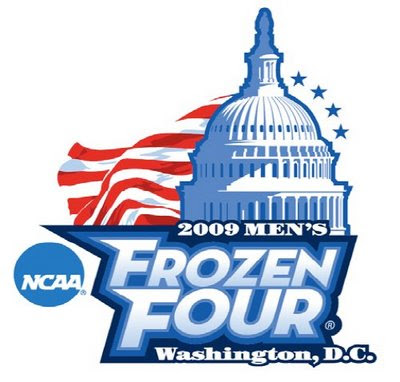 Brandon Yip's Boston University Terriers and Brad Hunt's Bemidji State Beavers have a shot at College Hockey's top prize. Both of their squads advanced to the Frozen Four in Washington after this past weekend's college hockey action.

Hunt's Beavers is the biggest surprise of 4 teams remaining.

Bemidji State opened up their weekend by knocking off the number 1 seed in the Midwest Region by upsetting Notre Dame in the regional semi final. Hunt had 1 assist in the win while Matt Dalton stopped 33 of 34 shots between the pipes.

Up next in the Midwest regional final, Bemidji advanced to Washington with a 4-1 win over Cornell.

Bemidji State becomes the first team not from college hockey's Big 4 conferences to advance to the Frozen Four. The Beavers play in the College Hockey America conference.

The Northeast final saw BU earn a date with the New Hampshire Wildcats. This one was a tight game and BU needed a powerplay goal by Jason Lawerence with 15 seconds remaining in the 3rd period to break a 1-1 tie and send BU to the Frozen Four.

Two other Express alum were looking to earn a birth in the Frozen Four, but Tyler McNeely's Northeastern Huskies saw their season end when they lost to Cornell by a score of 3-2 in the Midwest semi final. Patrick Wiercioch's first season in Denver came to an end when they lost their West region semi final 4-2 to Miami.

The tournament begins Thursday April 4th as Boston University will play Vermont in one semi final. That will be followed by Bemidji State facing Miami.

The winners meet in the championship game Saturday April 11th.

In Canadian college hockey, Mark Soares was seeking the Canadian crown, the University Cup. The Express all time leader in points and games played is a member of Lakehead University Thunderwolves.

The University Cup was played this past weekend. The host Thunderwolves lost to the University of New Brunswick in a semi final game 3-1 on Saturday. UNB went on to win the Canadian championship as they defeated the University of Western Ontario Mustings 4-2 in the final.
Posted by Eddie Gregory at 5:56 PM No comments: 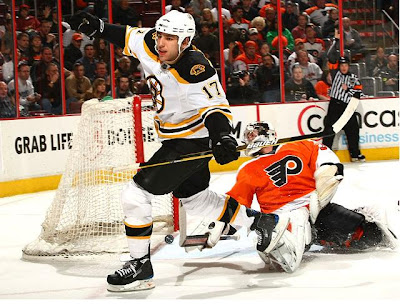 Former Express Milan Lucic had a big night last night in Philly. He scored twice in the first period as the Bruins defeated the Flyers 4-3. Plus, Lucic had a big hit on Randy Jones and the best part was the reaction the hit drew from Bruins announcer Jack Edwards.

U.S. College Hockey playoffs are well underway. The league champions across the country have been crowned. Now the field for the 16 team NCAA tournament has been announced all with hopes of punching a ticket to the Frozen Four in April.

The 16 teams are divided into 4 regions and there are a few Express alumni in the tournament.

Brandon Yip's Boston University Terriers have earned the number 1 seed in the Northeast Regional. They're red hot right now and have a shot to win it all. This weekend they won the Hockey East Championship with a 1-0 win over UMass Lowell. BU is 20-2-3 since January and 13-0-2 on the road or a neutral site in that time.

The rest of the field was filled out with at large bids. Cornell, Denver, Miami (Ohio), Michigan, New Hampshire, North Dakota, Tyler McNeely's Northeastern Huskies who lost in overtime in the Hockey East semi finals, Ohio State, Princeton and Vermont.

This year marks the first time since 1994 that Northeastern has qualified for the tournament.

In Grand Rapids, No. 1 Notre Dame plays No. 4 Bemidji State, and No. 2 Northeastern takes on No. 3 Cornell. 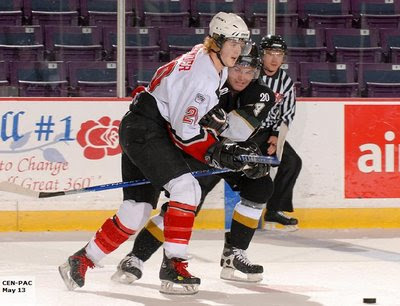 Paul spent 2 seasons with the Express from 04-06. He was a member of the 2006 Royal Bank Cup championship team.

He put up 15 goals and 35 assists for 50 points in 41 regular season games with the Express. In the 06 playoffs, Crowder took his game to another level putting up 8 goals and 2o points in just 16 games in spite missing the first round of the playoffs due to a shoulder injury.

Following the 06 season, Crowder accepted a scholarship with the University of Alaska Anchorage. He played 3 seasons with the Sea Wolves scoring 32 goals and 48 assists for 80 points in 107 career games.

"We are very pleased with this great opportunity for Paul," said UAA head coach Dave Shyiak. "He couldn't be more deserving of it. He did a great job representing Alaska Anchorage on the ice and in the classroom, and we wish him the best of success with the Rangers organization."

Crowder will immediately report to the Rangers AHL affiliate in Hartford.

Congratulations Paul.
Posted by Eddie Gregory at 12:39 PM No comments:

Express alum Kyle Turris had a career night as he had 2 goals and 2 assists as his Coyotes defeated San Jose 4-3.

It was the 2nd time this season Turris scored twice in a game.

Phoenix opened up a 3-0 lead before relinquishing it up as the Sharks clawed back to tie the game. But the deadlock was broken when Turris set up Coyotes captain Shane Doan for the game winning goal with less than a minute left in the third period.

Turris now has 8 goals and 12 assists for 20 points in his first full season in the desert.

Here's how it looked thanks to NHL.com.

Posted by Eddie Gregory at 10:36 PM No comments:

NO RUST FOR THE RESTED 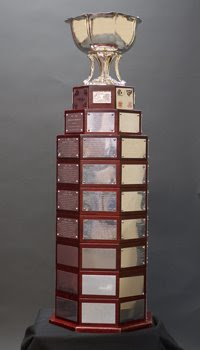 The Conference finals matchups are now set in the run for the Fred Page Cup.

The Vernon Vipers will play the Salmon Arm Silverbacks in the Interior final. And the Victoria Grizzlies needed 7 games to knock off the Cowichan Valley Capitals and earn a final 4 date with the Powell River Kings in the Coastal final.

This is the 2nd year that both the Interior and Coastal Conference had a pair of teams earn first round byes.

And if there's one common theme the last two years its this, no team has shown any signs of rust after earning some much needed rest.

There have been 8 teams the last 2 years that have earned first round byes, and all 8 have won their 2nd round matchups and advanced to the conference finals.

Both matchups have great story lines.

The Coastal final sees the league's top team (Victoria) continue their quest to go through the front door of the Royal Bank Cup they will be hosting in May. Powell River showed in their 5 game domination of the Surrey Eagles that they can play just as well defensively as they can offensively.

Powell River outscored Surrey 25-3 in series. Carsen Chubak had a pair of shutouts while stopping 116 of 119 shots.

Victoria had a scare though, they opened up a 3-1 series lead on the Cowichan Valley Capitals before the Coastal conference MVP Chris Rawlings showed why he earned that crown by stopping 81 of 83 shots in back to back wins to force a game 7. But in game 7, Victoria's big guns who were rather quiet heading into the game stepped up large.

Over in the Interior, Vernon dropped their opening game of their 2nd round series with Penticton 4-3 in overtime. But then the Vipers took over the rest of the series taking the next 4 games eliminating the defending champions in 5 games.

Salmon Arm matched up with Westside in round 2. This series had the potential to be a dandy. But injuries hampered the Warriors.

2 time Interior defenceman of the year Justin Schultz suffered a deep knee bruise in the first round vs. Trail and missed the first 2 games of the series. The injury really hampered Schultz who was not the same player when he returned.

Plus, goaltender Kevin Jebson went down in game 2 with groin and hamstring pulls and never returned.

This series features 2 teams that have a long rivalry due to their close geographical proximity to one another. This is the first time these two teams will meet in an Interior final.

It's hard to predict who will prevail when the dust settles. All I know is, you the fan will be the one who will benefit if you are able to attend a game as they will be beauties.
Posted by Eddie Gregory at 9:51 PM 1 comment:

I know it's been awhile since I posted on the blog. I guess since the season has ended.

Even though the Express are done, i've still been seeing a lot of hockey. I watched Brady Cook's brother Matt play in the sledge hockey tournament at UBC a few weeks ago. What a experience that was. Truly phenominal how fast and physical that game is.

I went and saw Calgary play Vancouver last Friday in the game of the year in the WHL... WRONG! Man what a dud that was. But Calgary played well defensively and shut down the Giants. Had a quick chat with former Express Keith Seabrook after the game before he hopped on the bus for the 12 hour ride back to Calgary. Good to see he's doing well. Said he's hoping to play pro next season after his junior career is finished. Who knows, he may be back in Vancouver in a few months playing for the WHL Championship.

I've also been watching some of Surrey's playoff games. I've been there for all 4 of their wins thus far in the playoffs. All 3 on home ice in overtime. Games 3 and 4 vs. Langley were some of the best BCHL playoff games i've ever witnessed. True beauties. However, last night's 1-0 Surrey win over Powell River in OT was the exact opposite. No intensity at all. No, emotion. Good to know that was the exception rather than the rule. Nice to see former Express Spencer Bennett score the game winning goal on a powerplay.

That's it for now,

Talk to ya soon.
Posted by Eddie Gregory at 1:10 PM No comments:

NHL Network has been doing features on play by play broadcasters around the NHL titled voices. For a play by play guy like me, it really is interesting to see some behind the scenes stuff of guys who do it in the worlds best league.

NHL.com posts about a 3 minute cut down version of them online and i've watched about all 25 of them so far. I could easily spend a whole day watching the entire episodes. I also could have posted all of them, but I thought you would get bored of them at some point.

They recently posted one on someone I deal with on a fairly regular basis. Canucks voice John Shorthouse. I watched it of course.

Here it is enjoy.

Posted by Eddie Gregory at 1:04 PM No comments: