The 2016 BCHL exhibition kicked off Wednesday night. The Express played host to the Langley Rivermen and it was the visitors coming away with a 5-2 win.

Veterans Cam Bertsch and Owen Stout had some of the better scoring chances for the Express in the first period with Bertsch getting stopped on a bang bang play by Bo Didur. Then Owen Stout hit the post on a breakaway.

Langley had the only goal of the first period and the Rivermen outshot the Express 9-8.

The visitors in the first half of the second period looked to expand their lead, but Express netminder Kolby Matthews made some of his best saves of the game on a 2 on 1, a rebound chance coming to his left and a deflection.

Veteran Bo Didur got the start for Langley and was perfect in his 30 minutes of action.

12 minutes into the second period Angus Crookshank found a loose puck and scored for a 2-0 Rivermen lead.

The Rivermen quickly responded to re-store their two goal lead and it was 3-1 through two periods.

Brendan Prappas midway through the third period again pulled the Express within one on a breakaway goal beating Zakery Myrowich.

Satchel Clendennin and Brendan Budy rounded out the scoring for the Rivermen who outshot the Express 36-25.

The Express were 1 for 5 on the power play while Langley went 1 for 3.

Cam Bertsch, Blake Hayward, Owen Stout and Alex Ambrosio were the returning veterans in their lineup in the exhibition opener.

The teams will meet again Thursday night at the Langley Sportsplex.
Posted by Eddie Gregory at 10:05 PM No comments:

The Express will open their training camp for the 2016-17 season Monday at the Poirier Sports and Leisure Centre.

Here's their full exhibition schedule leading up to the start of the regular season September 9th in Surrey. 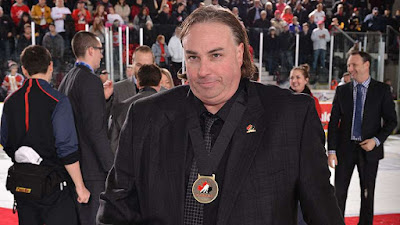 Coquitlam Express Head Coach and GM Barry Wolff is going back to the World Junior A Challenge. This time around he will guide Team Canada West as the Head Coach.

The 2016 World Junior A Challenge will be played in Bonnyville, Alberta from December 11th-17th.

He served as an assistant coach in 2010 and at last years event helping Team Canada West win the gold medal. Barry also served as a guest coach and talent evaluator in preparation leading up to the 2014 World Junior A Challenge for Team Canada West.

“It is a great honor to be selected as the Head Coach of Team Canada West and I look forward to working with the elite level players and a great staff, said Barry Wolff. I am excited for this opportunity to represent Canada again at the World Junior A Challenge.”

Click here for the full press release from the CJHL
Posted by Eddie Gregory at 7:31 PM No comments: