Apologies for the lack of updates on the blog. My schedule has been pretty busy from the time the Express were eliminated from the playoffs until now. And that included my trip to Russia.

I have to provide some updates on some Express scholarships since the season came to an end.

During the regular season, the Express were able to get scholarships for Garrick Perry, Brad Reid, Massimo Lamacchia, Jared Eng and Destry Straight. And the player commitments have continued from the conclusion of the season in early March.

Defenceman Matt Mazzarolo has signed on to play Division III Hockey next season with Neumann University in Pennsylvania. Mazzarolo was acquired by the Express early in the season in a trade with the Surrey Eagles. The 20 year old was a steady physical presence for the Express this past season. He played 33 games with the Express and scored 1 goal and 5 assists for 6 points.

Mark Begert is following in the footsteps of fellow rookie Destry Straight as Begert has secured a scholarship to Boston College for next season.

Begert had a very solid rookie campaign in the BCHL. He showed fine progression and development throughout the course of the season. He was one of only three players to play in all 60 games during the regular season. Massimo Lamacchia and Jason Grecica were the others. Begert scored 4 goals and 7 assists for 11 points. Three of Begert's goals came on the powerplay. The other, which was his first in the BCHL came into an empty net after exiting the penalty box on December 17th vs. the Quesnel Millionaires.

Mike Krgovich became an instant key member of the Express attack when his rights were acquired from the Salmon Arm Silverbacks in November. He gave the Express some scoring punch, grit and the ability to be relied upon as a key checker vs. the oppositions best players. He will now take his talents up Burnaby mountain where he will play for the two time defending BC Intercollegiate Hockey champion SFU clan for next season.

Last but certainly not least was Riley Mcintosh. He has committed to Lakehead University in Thunder Bay Ontario. Ri-Mac had a fantastic 20 year old season with the Express. He was named the teams MVP and Top defenceman. He was the anchor on the Express blueline all season long.

His steady play made life easier for the Express when he was on the ice. He used his 6'5 frame to his advantage by blocking countless number of shots by being in the right position. He was regularly matched up against the top forwards of the Express opposition. His effortless style allowed him to play upwards of 30 plus minutes per night. And towards the end of the season it wasn't uncommon that he would play 35 plus minutes and take 4 minute shifts. His skating and puck moving ability allowed the Express to quickly breakout of their own zone and get on the attack.

Mcintosh led all Express defenceman in scoring with 11 goals and 36 points. He is the second player the Express have sent to Lakehead University. All time leading scorer Mark Soares is one year removed from a 4 year tenure at Lakehead following Soares winning a Royal Bank Cup with the Express in 2006.
With the addition of Mcintosh, Begert, Mazzarolo and Krgovich to the list of commitments the Express had in the regular season, they have sent a total of 9 players to post secondary institutions for next season. Not a bad number for the Express organization.
Posted by Eddie Gregory at 9:32 AM No comments: 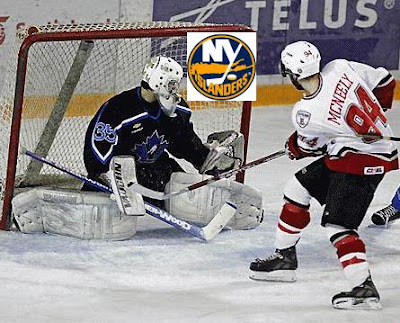 Former Express teammate Brad Hunt and somehow a die hard Islander fan is jealous of Tyler McNeely, the former Express captain has signed a one year deal with the New York Islanders.
This season McNeely completed a 4 year career at Northeastern University where he scored 44 goals and 95 points. He then signed with the Islanders AHL affiliate in Bridgeport to finish the season where he averaged more than a point per game with 5 goals and 11 points in 10 games.
McNeely played three seasons with the Express from 2004-07 scoring 215 points in 161 games. His best year in the regular season at least came in the 06-07 when he scored 32 goals and 104 points. But he is best remembered for his performance in the 2006 playoffs. He led all BCHL scorers with 36 points in 20 games including scoring the Fred Page Cup winning goal in game 6 vs. the Penticton Vees. That was part of the journey that eventually saw McNeely lift the Royal Bank Cup.
Posted by Eddie Gregory at 6:08 AM No comments:

NHL Central Scouting came out with it's final rankings for the draft coming up in June in Minnesota.

The Coastal Conference rookie of the year drew plenty of interest from NHL clubs early in the year and didn't dissapoint. He was selected to participate at the CJHL Top Prospects Game in Dauphin Manitoba in December. He returned from the trip to the prairies and was one of the Express' most consistent point producers helping lead the Express to their first playoff appearance in three seasons.

Straight finished the year with 26 goals and 67 points which was second in Express scoring. He then added another goal and two assists in four playoff games.

Other BCHL players listed include, Westside's Micheal King and Trail's Joey Baker ranked 133rd and 134th. Baker's Trail teammate Sam Mellor is ranked 147th. Pearce Eviston and Madison Dias of the Victoria Grizzlies are slotted 153rd and 165th. Ryan Renz who split this past season in Alberni Valley and Vernon was ranked 208th.
Posted by Eddie Gregory at 10:06 AM No comments: