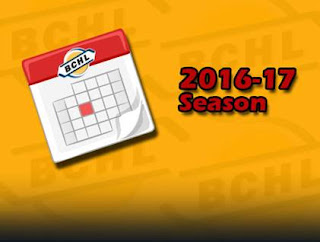 Getting caught up on the Express upcoming schedule for the 2016-17 season.

Changes to the BCHL website recently prevent seeing the full schedule on one web page.

Links to each month.

Similar to last year the Express will spend the month of September on the road. It will start with a pair of games September 9th and 10th in Surrey and Langley. Then visits to Vernon and Salmon Arm.

The showcase will follow in Chilliwack with the Express being the home team on Thursday September 22nd vs. the defending RBC cup champion West Kelowna Warriors at 1pm. Then two days later the Express will play in the secondary rink at 3pm as the road team vs. the Alberni Valley Bulldogs. That game is one of only two total games at the showcase to be played in the secondary arena.

The Express will have a full home and home with West Kelowna and Alberni Valley this season in addition to the two showcase meetings.

The following weekend will see the Express head to the Island for a three game swing in Victoria, Nanaimo and Alberni Valley. That will complete the first 10 games of the season before the Express will play their home opener Friday October 7th vs. the Langley Rivermen in the first of a home and home. That will be followed by a visit next Thursday to Surrey. All told the Express will play 11 of their first 12 games away from the Poirier Sports and Leisure Centre.

That will be followed by a 5 game home stand which includes the only regular season visit from the RBC cup champion West Kelowna Warriors on Wednesday October 19th.

Following the home stand the Express head to Prince George for two visits up north this season. They will play a pair of games October 28th and 29th. And they will have a single visit Friday November 25th. Like last year there will be a quick turnaround for the Express after a game in Prince George to come back to the Mainland for a home game the next night vs. Vernon.

Other notes from the schedule include:

The Express will play a total of 34 of their 58 games against Mainland division opponents. 7 each vs. Surrey, Langley, Chilliwack, Wenatchee and 6 vs. Prince George.

They will play 4 road and 3 home vs. Chilliwack and Langley. And 4 home and 3 road vs. Surrey and Wenatchee. And 6 vs. Prince George three home and away.

Among those 14 games it will include back to back weekends with three games on three consecutive days. That includes a trip to Powell River and Cowichan Valley. As January draws to a close the Express will play a 4 game home stand.

They will open February with a pair of games in the interior vs. Trail and West Kelowna. Those two games will be last significant travel the Express will have after January 16th in Wenatchee. To conclude the regular season the Express will finish with a four game home stand concluding February 24th vs. Prince George.

Posted by Eddie Gregory at 1:45 PM No comments: