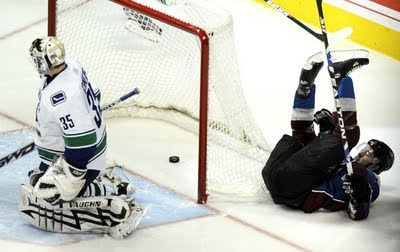 Former Express captain David Jones has a new deal in his back pocket with the Colorado Avalanche.
The 26 year old signed a 1 year qualifying offer worth 2.5 million which is a substantial raise from the $850, 000 he made last season. Jones is coming off his best season in the NHL where he tied for the team lead in goals with 27, helped out with 18 assists and played a career high 77 games.
Those numbers come after he was plagued with injuries the previous two seasons where he played just 23 and 40 games.
The North Vancouver native was an original Express who played three seasons with the club from 2001-04. He was drafted by the Avalanche in the 9th round 288th overall in 2003.
Posted by Eddie Gregory at 11:38 AM No comments:

EXPRESS PRESENT AND PAST COME HOME WITH BRONZE

Three players with Express connections Matt Hutchinson 2010-Present, Jared Eng 2010-11 and Max Grassi 2004-07, 2008-09 are coming home with Bronze medals around their necks representing Canada at the 2011 World Inline Hockey Championships recently completed in the Czech Republic.
Canada won their first medal at the event since 1998 with a 13-7 win over Sweden in the bronze medal game. Grassi had a goal and 4 assists in the bronze medal game, captain David Hammond scored six times.
Grassi had 3 goals and 8 assists for 11 points in 6 games, Jared Eng scored 1 goal and Matt Hutchinson who is listed on the website as "Gordon" had an assist in the 6 games played.
Hutchinson is eligible to return to the Express next season, Jared Eng is off to Sacred Heart for next season and Max Grassi will return to UBC for next season.
Congrats boys. Hope the international experience was something memorable.
Posted by Eddie Gregory at 11:22 AM No comments:

Many Express followers were following rounds 2 through 7 of the NHL draft Saturday looking to see where Coastal Conference rookie of the year Destry Straight would be selected.
It wasn't meant to be as he wasn't one of the 211 players selected over the course of 7 rounds. Destry started the year as a "A" prospect in the first round of rankings for this years draft back in the fall. He finished the year ranked 100th among North American skaters. Straight will now shift his focus to the next stage of his life which is starting his NCAA career in the fall with Boston College.
In fact only 2 players were selected directly out of the BCHL this year with Joel Lowry of Victoria going the LA Kings in the 5th round 140th overall and Josh Manson of Salmon Arm was selected by the Anaheim Ducks in the 6th round 160th overall.
A pair of goaltenders who got their start in the BCHL Laurent Brossoit (Cowichan Valley) and Nathan Lieuwen (Westside) went in the 6th round selected by Calgary and Buffalo 164th and 167th overall. Former Vernon Viper Garrett Noonan who is now enrolled at Northeastern University was picked by Nashville in the 4th round 112th overall.
Posted by Eddie Gregory at 11:41 AM No comments:

STRAIGHT TO THE DRAFT 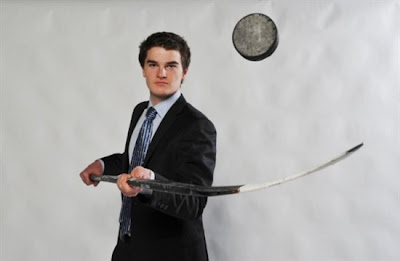 The NHL Draft is coming up on Friday in Minnesota. Obviously one of the big questions from an Express point of view is where and what team will select Destry Straight?

We will find out, more than likely it will be on Saturday when rounds 2-7 are conducted with Straight ranked 100th among North American skaters.

In Sunday's edition of the Vancouver Province the BCHL's Coastal Conference rookie of the year was featured as part of their 2011 Head of the Class feature by Howard Tsumara.

Read the article below.

In fact, he's got the perfect name for a hockey player who gets to where he needs to go in the most efficient way possible.

Yet when the senior at West Vancouver's Sentinel Secondary was lacing up his skates in the fall for his first season of junior hockey, he figured there might be a few crooked miles to skate first, before he fulfilled his dream of playing NCAA Div. 1 hockey in the U.S.

Well, the straight-up truth is that Straight changed things in a hurry.

"I didn't think coming in that I would be leaving after one season," admits the 6-foot-1, 170-pound centre, who exploded on the scene with the B.C. Hockey League's Coquitlam Express and was named the league's Coastal Conference Rookie of the Year. "I thought it was going to be a two-to-three year thing. But over the course of the season, my expectations went up and I think I actually could have done more than I did."

Despite his inexperience, Straight's combination of high-tempo fluidity and creative vision immediately opened all the right eyes.

In late October, just a handful of weeks into the season, NHL Central Scouting had graded him with an 'A' rating which is assigned to "a must-see player who is predicted to be a potential first or second round draft selection in the upcoming NHL draft."

Straight, who would go on to lead all BCHL rookies in points this season (21-46-67, 59 games) and be named the league's Coastal Conference Rookie of the Year, was the only BCHL player assigned that designation.

"Did I expect to lose him after a year?" asks Coquitlam head coach Jon Calvano, who also coached Straight at the major midget level. "No. Destry exceeded expectations as far as his readiness to make the step to the NCAA and a school like Boston College. But he didn't exceed my expectations as far as what he could do in terms of his offensive output."

In its most recent rankings, Central Scouting had Straight 100th among North American skaters in advance of the NHL's June 24-25 entry draft in Minnesota.

Yet despite what happens in the draft, Straight is thrilled to be headed for Boston College, a school which has played in 22 Frozen Four national semifinals, and has won four national championships.

"I wanted to go where the best hockey was and Boston College was the reigning champions," said Straight, who made his committment to the school in late November. "I think it's the perfect fit for me."
Posted by Eddie Gregory at 2:40 PM 1 comment:

There are now 3 Stanley Cups won by former Express players as Milan Lucic and his Boston Bruins were crowned NHL Champions in a 4-0 win over the Vancouver Canucks in Game 7 at Rogers Arena last night.

Lucic joins Andrew Ladd who already has two cup rings with Chicago in 2010 and Carolina in 2006 as former Express who have won the Stanley Cup.

There's no question in my mind that the better team won the series and the Bruins need to be recognized their efforts over the course of the series.

Lucic put it best when he said a few times after the game last night that some of his most memorable moments in hockey took place in his home town of Vancouver which included getting drafted by the Bruins in 06 at then GM Place, winning the Memorial Cup with the Giants in 07, winning the Junior Summit series a few months later and now winning hockey's ultimate prize.

Congratulations Milan, it looks good on you.
Posted by Eddie Gregory at 12:17 PM No comments:

This past weekend the BCHL had their annual general meeting. The news coming out of it included Express President and GM Darcy Rota recieving an award and stepping down from his post of chairman of the board for the BCHL. Plus the details of how the schedule will be constructed this season. See the full press release below.

The British Columbia Hockey League held its Annual General Meeting June 2 to 4 in Richmond and met with governors, coaches and team marketers to wrap up the 2010-11 season and set out plans for 2011-12. The coming season will be the league’s 50th anniversary and as it approaches, several celebratory events will be announced.

An important task completed at the AGM was determining the number of home and away games for in-conference play. The half-interlock schedule will have each team play every other team but visit only four rinks in the opposing conference.

“We will have the 2011-12 schedule completed by the first week of July,” said BCHL executive director Dave Sales. “Within conference, this is going to be the most balanced schedule we’ve ever seen.”

Another change is that the schedule will start Sept. 23, two weeks later than last year. As such, it has been mandated that each club’s main training camp will begin no sooner than Aug. 22.

With respect to the board of governors, executive committee chairman Darcy Rota of the Coquitlam Express and Vernon Vipers owner Duncan Wray were named co-recipients of the league’s Executive of the Year award. Rota also took the opportunity to announce he is stepping down as chairman and Wray was nominated to take his place and has accepted.

“Both Darcy and Duncan have been exemplary partners in our league and have elevated the BCHL’s status through their dedication,” said league commissioner John Grisdale. “With Duncan moving into the chairman’s role, I know we will not miss a beat moving forward.”

Also, as Wray was already on the executive committee, Westside Warriors owner Mark Cheyne has joined the group to keep it at five members. Surrey’s Ronnie Paterson will continue as co-chair and Trail’s Tom Gawryletz and Alberni Valley’s Andy Oakes stay on board as well.

“I have a great deal of respect for what Darcy did and I understand his reason for moving on,” said Wray, who served a six-year term as chairman prior to Rota. “There are still some things I’d like to accomplish and hopefully I can lead the charge with the new board.”

Personally I like how it looks that the schedule will be put together this season. I would still prefer that the league have a full interlocking schedule and have every team visit every single rink. Back in the 08-09 season when the league most recently had only a half interlocking schedule, we saw the Express play a total of 36 of their 60 games vs. three teams the Powell River Kings, Surrey Eagles and Langley Chiefs. And that was way too many games against just a small handful of teams. This format gives the league a little more balance when it comes to all the opponents in the conference at least.
Posted by Eddie Gregory at 4:39 PM No comments:

Former Express Patrick Wiercioch is a champion in his first pro season. His Binghamton Senators won the AHL's Calder Cup Tuesday night with a 3-2 win over the Houston Aeros to take the series in 6 games.
Wiercioch played 42 games with the Express in the 06-07 season. Then was off to the USHL where he won a national championship with the Omaha Lancers the next season. He was then drafted by the Ottawa Senators in the 2nd round 42nd overall in 2008. He then played two years at the University of Denver before turning pro prior to this season.
With the baby Sens Wiercioch scored 4 goals and 18 points in 67 games. He made his NHL debut for Ottawa on March 22nd this year in Carolina. He recorded his first NHL point an assist 5 nights later in Atlanta. He played a total of 8 games in Ottawa this year picking up a pair of helpers along the way.
Wiercioch dressed for 15 games in the playoffs with Binghamton including dressing for his only game in the Calder Cup final in the championship clinching 6th game.
Congratulations Patrick.
Posted by Eddie Gregory at 10:46 PM No comments: