According to the MJHL site the Express have acquired defenceman Matt Hutchinson in exchange for future considerations. 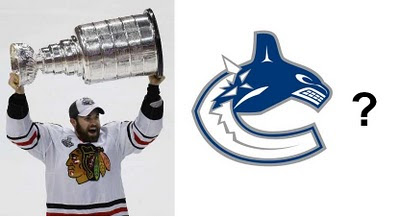 Last season, Ladd scored 17 goals and added 21 assists for 38 points in 82 games. In the playoffs, he scored three goals and three assists for six points in 19 contests.
Posted by Eddie Gregory at 8:02 AM No comments:

The Coquitlam Express is pleased to announce today that John Blessman has been named Program Director of the Junior “A” Hockey Club.

Blessman, 43, returns to the Express after spending the 2001-2002 campaign as an Assistant Coach with the team. John most recently has served as the Director of Player Development of Aldergrove Minor Hockey Association and the Head Coach of the Raven Spring Hockey Academy.

President and General Manager Darcy Rota is looking forward to having Blessman back in Coquitlam with the Express. “We are really happy to have John back with us in our organization in this newly created position as our program director. John will be the lead instructor in our hockey schools, Academy’s and skill development camps for young hockey players and will build a skill development program for both boys and girls Minor Hockey Associations. With John’s past experience as a player and outstanding work as a hockey instructor he will play a very important role in our organization.”

Blessman played over 540 games in the Minor League ranks after being drafted by the New Jersey Devils in the 9th round of the 1987 NHL Entry Draft, commented “I am very excited about this opportunity and again to be working the Coquitlam Express. I enjoy working with young hockey players in improving their hockey skills and look forward to developing programs that will challenge young athletes.”
Posted by Eddie Gregory at 4:59 PM No comments:

The Express will officially make their Coquitlam re-debut on September 10th on the Island in Victoria. The team will play its first 4 games of the season on the road due to lacrosse commitments at the Coquitlam Sports Centre.

Here's how the schedule will break down for this coming season.

Coquitlam and Surrey will play each other 12 times this season and 7 times over the course of the first 2 months of the season.

The Express and Chiefs rivalry will be re-ignited 10 times.

The Express will have 1 home and 1 away game vs. the 8 Interior conference teams.

6 times the Express will play 3 games in 3 nights.

Other highlights of the schedule will include a season high 6 game home stand from December 10th to January 2nd with the 11 day Christmas break sandwiched between.

Immediately following that homestand, the Express will be on the road for 8 of their next 9 games. 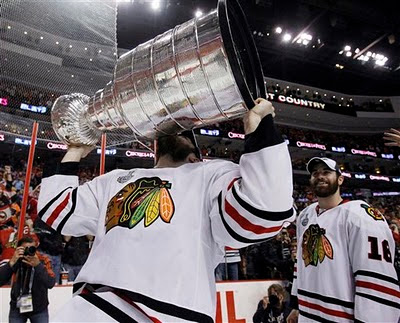 It may be old hat for former Express Andrew Ladd, its not for Ladd's Chicago Blackhawk teammates.

The Maple Ridge native scored a second period goal tipping a Niklas Hjalmarsson slapshot in game 6 as the Hawks won their first Stanley Cup since 1961 defeating the Philadelphia Flyers 4-3 in overtime of game 6.

This is the second Stanley cup championship for Ladd who won a cup with the Carolina Hurricanes in his rookie season in 2006.

For most of the third period it was looking as though Ladd's goal might stand up and be immortalized as being the cup winner for 2010. But that changed when Scott Hartnell's second goal of the game pinballed past Annti Niemi and forced overtime late in the third period.

Patrick Kane became the hero when he scored in overtime sliding a shot under Micheal Leighton.

Another Express connection to this Stanley Cup is that of Brent Seabrook whose younger brother Keith played 2 seasons with the Express from 2004 through 2006.

Posted by Eddie Gregory at 10:14 PM No comments:

Here's Dan Olsen's story from the Coquitlam Now on the 6 Express signings and some other player personnel moves.

Whether it’s rebuilding or, as Darcy Rota prefers to call it, retooling, the Coquitlam Express president/general manager now has more pieces to get the job done.
The B.C. Hockey League club announced the signing of six players Monday, a couple of days after receiving their player cards from Hockey Canada.

Fittingly for a team that finished last in the conference and third from the bottom in a 17-team league, every position is addressed in the first batch of signings.

The names of Khaleed Devji, Mark Begert, Justin Elliott, Justin Georgeson, Mitchell Deacon and Destry Straight may not ring many bells now with local hockey fans — although Deacon is a strapping Port Moody minor product — but Rota and head coach Jon Calvano believe they will be key pieces to an improved lineup for the 2010-11 season.
Coupled with two trades, the Express are looking to unleash a bolder, bigger squad when the junior A season kicks off in September.

In separate deals, they acquired the BCHL playing rights of Western Hockey League veteran and Coquitlam native Riley McIntosh and forward Steve Axford.
“These players address our needs at various positions and will make us a better team,” head coach Jon Calvano said.

Devji is an 18-year-old netminder who, as a rookie with the Pacific International Junior B league’s Grandview Steelers, posted the league’s best save percentage while recording 22 wins in 35 games. The 5’11 West Vancouver stopper was also voted the league’s MVP.
He played for Calvano during the Vancouver NorthWest Giants’ run to a 2008-09 B.C. Major Midget title.
“He did extremely well as a rookie (in junior B) and played a big part with the Giants. He’s very athletic, very lanky — although he’s not big, he’s really quick on his feet,” Calvano said.

Poised to battle for roles on defence are Begert and Elliott, who offer contrasting styles of play. Seventeen-year-old Begert registered four goals and 23 assists with Calvano’s Giants last season, demonstrating solid puck-moving abilities.
“He was one of our top-two defencemen, he’s a good skater who moves the puck well and makes good outlet passes.”

The 18-year-old Elliott skated in Grandview, and as a freshman racked up nine goals and 10 assists in 47 games. While his 12 penalty minutes suggest he isn’t a Chris Pronger type, his 6’2, 195-pound frame will be a major asset on defence, Calvano said.

The backline is ripe for opportunity, with positions open due to graduation and the recent defection by Simon Denis to the U.S. Hockey League.
To add a veteran presence to what will likely be a young defence, Rota acquired the rights to McIntosh, and hopes to have a commitment firmed up from the 6’5, 205-pound skater.
“He’d be a really good fit here, a local boy who would bring a lot of experience,” Rota said. McIntosh has 182 games of WHL experience.
Up front, both Deacon and Georgson will try to make the jump to junior A from major midget, having skated together with the Northeast Chiefs.

Deacon scored nine times and set up 21 goals over 40 games, while incurring 54 penalty minutes. At 6’3 and 177 pounds, he has impressive size for a 16 year old — he turns 17 before training camp opens. Georgeson, a Maple Ridge native, tallied 21 goals and 29 assists as one of the Chiefs’ on-ice leaders.

Straight, at 6’1 and 165 pounds, is a slick playmaker with plenty of offensive upside, having scored 12 goals and 51 assists in 39 major midget games.
“He’s got very good offensive skills, speed and he sees the ice exceedingly well.”

Axford, meanwhile, comes to Coquitlam via Camrose, the final piece to a Jan. 10 swap that sent winger Luke Challier to Alberta.

The 5’10 Victoria native split the season between Powell River and St. Albert, accumulating three goals and five helpers over 53 games, but was a top-five scorer in the Vancouver Island junior B League two seasons ago.

More moves and signings are expected in the coming weeks, Calvano said.
“We’re working slowly but steady deals, but getting these players on cards is a major step that has been in the works for a while. Definitely we’re looking to get a bit more tougher because we’ve got to compete against the Langleys, the Merritts and the Surreys.”

Calvano also announced Grant Kerr, one-time head coach of the Port Coquitlam Buckeroos, and Mark Goble as the assistants who will join him behind the bench. The pair bring a lot of junior coaching experience to the club, and have both played key roles in his own development as a coach.

“My goal is to be here for a long time and establish a winning program, like the Vernons, Pentictons and Nanaimos,” Calvano said. “A big part of it is surrounding yourself with good hockey people, which we’ve done. When you get that going, the kids do the recruiting for you.”

The league will release the 2010-11 schedule later this month, with Rota noting that it will include plenty of Friday evening home games. The regular season is slated to begin Sept. 10. Because of lacrosse commitments, the club will launch the season on the road.
Posted by Eddie Gregory at 5:58 PM No comments:

Last season the Express sent forward Luke Challier to the Camrose Kodiaks in exchange for forward Lane Menage and future considerations. The deal has now been completed with the Express acquiring forward Steve Axford.

Camrose acquired Axford from the St. Albert Steel then quickly flipped him the way of the Express.

Have you ever wondered what the Express record was when scoring first last season?, or what the Express penalty shot record was in the 05-06 season? or how many hat-tricks Kyle Turris had in the 06-07 season? Well, all that information, plus the record of every game played the last 6 seasons and more is now available.
Check out the right side of the blog below the Express HockeyDB links and you will see A list of Express notepads available to view in PDF format. The records go back to the last 6 Express seasons since i've been doing the broadcasts.
Posted by Eddie Gregory at 10:51 AM No comments: