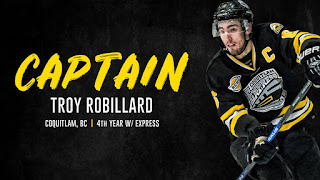 The 6'3" 205 lbs Robillard was born and raised in Coquitlam and has spent the past 3 seasons with the Express. The coaching staff believes that Robillard was the easy choice. Coach Fortier stated "We spoke to our returning players and new recruits, after a brief chat they unanimously chose Troy to lead them this season. He is a motivated athlete that has the character and discipline to be successful in life. We all believe Troy will help us raise the standard and create a new culture. Alex Ambrosio was our past captain and did a great job so we are looking for Troy to build from which the passion Alex brought and create his own style."

"I am extremely honored and grateful for this opportunity and to have the support and respect from teammates and staff, means a great deal to me. When the coaches announced my name, it was a surreal feeling. They explained their decision and made it very clear that being a good teammate and someone who puts the teams needs ahead of my own will be my priority." said Robillard about today's announcement.

"All players want respect and belief in their abilities from coaches but for our staff to recognize Troy, and appreciate his values, the way he carries himself and how he treats others is something his family has made an obvious impact raising him." added Fortier.

When asked about expectations and where the newly appointed captain Robillard sees the Express this year, he responded optimistically "The staff did a very good job from organization, expectations and making sure camp was competitive. From the minute training camp began, the veterans were all really excited and it was a different camp than we had in the past. To get better everyday is something our coaches have preached and our expectations for the season are high. I don't want to put a number on where we finish because coaches are preaching that the results will come if we improve our habits and focus on what is needed to be successful. We are working to create a new standard for Express Hockey and I think we are going to surprise a lot of people."

The Coquitlam Express begin their 2018-19 regular season next Friday September 7 against the Surrey Eagles on the road at the South Surrey Arena.

Posted by Eddie Gregory at 6:25 PM No comments:

The Langley Rivermen picked up their second exhibition win this week over the Express with a 4-1 win Friday night in Langley. It was the third straight wins in as many games for the Rivermen in exhibition play.

The Express dressed a few more of their veteran players including Christian Sanda, Sam Kozlowski, Chase Danol and Jonathan Sheardown. It was also the first games of the pre-season for Pito Walton, Jack Cameron and Drew Cooper on the backend. 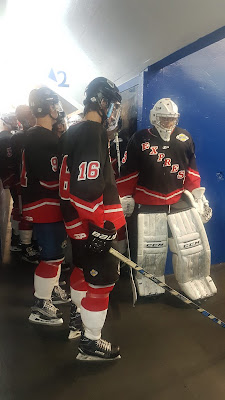 Each team was 0 for 2 on the powerplay in the first period. The Express shut down Langley's two advantages which included 30 seconds of 5 on 3 time.

Daneel Latagen opened the scoring in the final seconds of the first period snapping a shot that went through the legs of Express starter Thomas Wardle.

Wardle split the game with Kolby Matthews equally and the Rivermen also went with a 50/50 split with Alex Rolfe and Matthew Trulsen.

With the teams skating at 4 on 4, an Express turnover at the Rivermen blueline resulted in a chance on the counter attack and Ethan Leyh buried the rebound of a Conner Merrill shot for a 2-0 lead at 11:43.  Langley had a 25-8 advantage in shots after 40 minutes.

Just shy of the 5 minute mark of the third period a Christian Sanda goal was waved off due to a high stick.

Seconds later Kolby Matthews made the save of the night diving to his left to get a pad on a Ethan Leyh chance.

Just prior to the midway mark of the third period the Express got on the board thanks to a heads up pass from behind the net by Cooper Connell who teed up a pass for Chase Danol who blasted home a shot for his first goal of the exhibition at 8:52.

A late Express penalty in the final minutes was converted on the powerplay by the Rivermen thanks to a beautiful shot by Reed Stark ripping it over the glove of Matthews to seal the game at 18:07. Langley finished 1 for 6 unofficially on the powerplay. I had the Express 0 for 4 on the night.

Daneel Latagen rounded out the scoring with an empty net goal at 19:55.

The exhibition for the Express continues Tuesday night when they will take on the defending RBC cup champion Chilliwack Chiefs in Hope.
Posted by Eddie Gregory at 10:59 PM No comments:

The BCHL opened their exhibition schedule Wednesday night. The Express played host to the Langley Rivermen at the Poirier Rec centre. It was the visitors who came away with a 4-2 win.

The second period saw a regrouped Express squad that picked up their game which led to some of their better scoring chances on the night. Josh Bruce had a partial breakaway, Ryan Stack had a clean look in the slot, but they couldn't find the back of the net.

Early in the third period the Express got on the board with a shorthanded goal from Tristan Fraser.

That was followed by Daneel Lategen's second of the game at 8:33.

Marshall made the save of the night for both teams flashing the glove on a breakaway by Daylon Mannon who tried to flash some skill of his own by firing the shot with his stick between his legs.

Alex DiPaolo (UMass-Amhearst) rounded out the scoring converting a quick pass from Josh Wildauer who battled hard all night for a powerplay goal for the Express in the final minute of the 3rd period to make it a 4-2 game.

I had the Langley Rivermen unofficially 3 for 9 on the powerplay, while the Express were 1 for 3.

The exhibition resumes Friday night when the Express will visit Langley at the George Preston Recreation centre.

Posted by Eddie Gregory at 9:59 PM No comments:

The Coquitlam Express have bolstered their goaltending position just prior to the opening of training camp next week with the acquisition of local product Kolby Matthews (99) from the Calgary Canucks of the AJHL for future considerations.

The Coquitlam native is coming off his first full season of junior hockey and is familiar to local hockey followers.

In the playoffs he posted a 1-3 record while facing 34+ shots per game in all 4 contests.

He has made two cameo appearances with the Express as an affiliate player playing in one game in each of the 2016-17 and 2015-16 seasons.

Kolby played his major midget hockey in Coquitlam spending two seasons with the Vancouver Northeast Chiefs of the BC Major Midget league. He posted spectacular numbers during the 2016-17 season with a 21-3 record with a stingy 1.81 GAA. His 21 wins was tops in the BCMML that season.

Matthews will be on the ice next week when the Express open training camp on Monday. They will have intra squad games during the week. Monday's game starts at 7pm at the Porier Sports and Leisure complex.

Welcome to the Express Kolby.
Posted by Eddie Gregory at 4:16 PM No comments: