Kyle Turris provided some overtime magic for the Ottawa Senators with a rocket of a shot over the glove of Henrik Lundqvist to tie the series between the Sens and Rangers at 2 games apiece.

Great shot, but not quite as good as the rocket I saw him let fly in overtime game 1 of the Coastal Conference Semi Finals vs. Nanaimo, but it was close.
Posted by Eddie Gregory at 8:08 PM No comments: 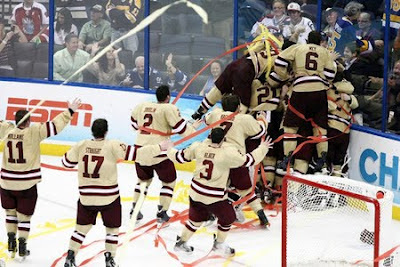 “You can’t buy one of these championships,” Eagles coach Jerry York said. “You have to earn them. And this team definitely earned it.”

Boston College (33-10-1) finished with a 19-game winning streak, outscoring its opponents 77-21 during that span. Ferris State (26-12-5) was making its first Frozen Four appearance.

Eagles goalie Parker Milner, selected the Frozen Four’s Most Outstanding Player, made 27 of his 33 saves in the final two periods.

“It’s hard to put it into words because everyone did their part and we came together as a team,” Milner said. “You don’t do this without contributions from everyone and that’s what we got.”

Paul Carey broke a tie with a power-play goal midway through the first period, redirecting Brian Dumoulin’s blast from left point to make it 2-1.

“We knew Ferris State was going to be outstanding,” York said. “They might not have the name recognition, but we knew how good they were. We stayed patient through the first two periods. Parker was extremely strong in net. You can’t be measured until you win that last trophy. Now this team can take its place among the other championship teams.”

Whitney opened the scoring at 3:18 of the first period, stealing a pass and beating lunging goalie Taylor Nelson. Thompson tied it at 5:19, and Carey put the Eagles in front at 10:33.

Gaudreau weaved through the Ferris State defense to make it 3-1 with 3:02 left in the game. He carried over the blue line with two defenders between him and the net. The freshman star went around one defenseman, faked forehand on the other blueliner, then went to his backhand and flicked a shot from the edge of the right circle. It got past Nelson to the far post.

Whitney added an empty-net goal with 1:03 to go.

“You can’t say enough about what Boston College has accomplished,” Ferris State coach Bob Daniels said. “I think that’s a very special program. It’s going to be hard to duplicate.”

The games on the ice may be done for the Coquitlam Express for the 11-12 season, but that doesn't mean that the works stops for a break in preparation for the 12-13 season.
The Coquitlam Express have landed a top recruit to start loading up for next season.
18 year old defenceman Callum Hofford has committed to join the Express next season.
He was a highly sought after defenceman by various BCHL clubs and the Express were able to bring him into the fold.
Speaking with Head Coach Jon Calvano today, he describes him as the top defenceman available and is the Alex Kerfoot of defenceman. He has the skill set that could help fill the void of graduating defenceman Clinton Atkinson.
Coach Calvano and Hofford do have a lenghty connection with Jon having known Callum since he was 10 years old.
Hofford comes to the Express with impressive credentials with a commitment to Northern Michigan University for the 13-14 season. He played for the Hill Academy Varsity team last season where he put up 21 goals and 65 points in 62 games.
There will be some comfort for Callum when he comes to Coquitlam for next season with numerous family members living in the Lower Mainland area.
Welcome to the Express Callum, we look forward to seeing you play next season.
Posted by Eddie Gregory at 1:30 PM No comments: