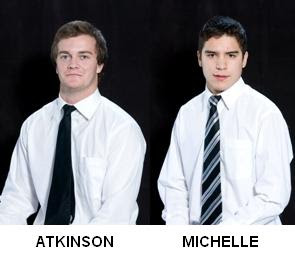 The trade last December that sent Brad Reid to the Salmon Arm Silverbacks has now been completed.

Clinton Atkinson D (91) and Cody Michelle FW (92) are coming to the Express as the future considerations to finalize the trade.

Atkinson will be entering his 20 year old season next year. He had a fine season last year finishing third among all BCHL defencemen with 48 points. Plus, his 45 assists were second among defencemen trailing only Coastal Conference MVP Joey Laleggia who was the top play maker in the BCHL with 62 helpers. In 105 career BCHL games, Atkinson has 5 goals and 50 assists for 55 points.

Express Head Coach Jon Calvano is familiar Atkinson having coached him with the Vancouver North West Giants in 06-07.

In his first season in the BCHL, Michelle had 11 goals and 28 points in 56 games. He brings some decent size 6' 173lbs and grit to the Express lineup. Prior to coming to Salmon Arm he played with the Prince Albert Mintos of the Saskatchewan Midget League.

Michelle captained Team Saskatchewan to a gold medal in the Aboriginal Midget Championships in 2010. He teamed up with Interior Conference Rookie of the year Bryce Gervais and Taylor Fauchoux for 46 points in that tournament.
Posted by Eddie Gregory at 10:50 AM No comments: 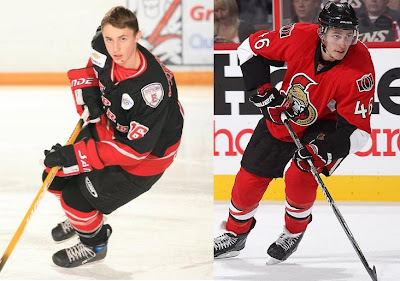 Former Express Patrick Wiercioch is expected to make his NHL debut tonight for the Ottawa Senators when they take on the Carolina Hurricanes in Raleigh.

He got the call to fill in for Sergei Gonchar who is sidelined with a concussion.

Wiercioch played the 06-07 season with the Burnaby Express as a 16 year old. He had 9 goals and 25 points in 42 games in his lone season in Express colors.

He then went to the USHL's Omaha Lancers where he was drafted by the Sens in the 2nd round 42nd overall in 2008.

He played the previous two seasons at the University of Denver. This season he's played his first full season of pro hockey with the Sens AHL affiliate in Binghamton racking up 4 goals and 16 points in 63 games.

From what I have read, Wiercioch had a slow start this season making the transition to the pros. But has been one of the baby Sens better players in the last 6 weeks.

Weircioch was quoted as saying "I'd be lying if I said I wasn't (nervous)". His parents are trying to make their way to Carolina for the game.

When he steps on the ice, Weircioch will become the 7th former Express to play in an NHL game and 2nd this season to make his debut after Mark Dekanich played earlier this season for the Nashville Predators.
Posted by Eddie Gregory at 10:59 AM No comments:

Here's two more videos from Cary Derksen to end the season featuring the top hits and plays of this past season.

Posted by Eddie Gregory at 4:05 PM No comments: 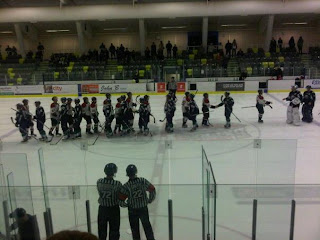 The Surrey Eagles completed a 4 game sweep of the Express with a 3-1 win.
A shorthanded Express roster played one of their best games of the playoffs.
The Express played without injured players, Mike Krgovich, Mitchell Deacon, Garrick Perry, Matt Mazzarolo and the suspended Cody Castro.
Coming up were AP's Alex Kerfoot, Mitchell Fyffe, Joey Santucci and Djordje Leposavic.
Despite the roster lacking in Junior A experience, the Express battled the Eagles hard all game long.
The difference in this game was of the main reasons Surrey completed the sweep. And that is the Eagles top line leading their attack. Richard Vanderhoek scored a pair of goals. Jeff Vanderlugt scored the other Eagles goal.
Destry Straight scored the lone Express goal in the second period off the rush to pull the Express even.
A tip of the hat is due to the Express. They battled hard all game long hoping that their season wouldn't come to an end on home ice.
Karel St. Laurent came up with some timely saves most notably in the second period off of Massimo Lamacchia and Austin Carroll. Khaleed Devji had another strong game in the Express crease.
The penalty killing had it's best night of the playoffs going perfect on this night. But the powerplay never found a way to get in track in this series. During the regular season the Express powerplay was among the top 5 in the BCHL. Surrey completely shut it down and did not allow a single Express powerplay goal in the 4 game series.
Whenever a season comes to an end, your heart always goes out to the 20 year olds. Their junior careers come to an end. Jason Grecica, Riley Mcintosh played their final games tonight. While Mike Krgovich, Matt Mazzarolo watched from the stands, and of course captain Garrick Perry was mending a dislocated shoulder after having surgery a few days ago. Jared Eng and Massimo Lamacchia also saw their junior careers come to an end as they have signed scholarships for next season.
Congratulations to the Surrey Eagles on winning this series. They will play the Langley Chiefs for the third straight year in the playoffs after they completed a 4 game sweep of their own with a 6-5 overtime win over the Alberni Valley Bulldogs.
Posted by Eddie Gregory at 10:15 PM No comments: