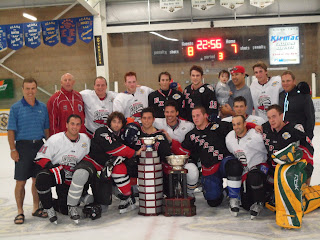 Saturday at the Burnaby Winter Club members of the 2006 Royal Bank Cup champion Burnaby Express team had it's first reunion since winning it all.

Alex Sciangula played an instrumental role in orgranizing this great day getting in touch with many members of the team and helping put it all together. Express alumni and Stanley Cup champion with the Boston Bruins Milan Lucic also took part in the event. Lucic played his first full season of junior hockey with the Express in 04-05 as a 16 year old.

It was a fun day had by all with old friends picking up where they left off last seeing each other i'm sure for some has been at least 5 or 6 years. Express President Darcy Rota had a pleasant surprise up his sleeve after the game on the ice was done as he was able to bring out the RBC Cup for the players to see again.

On behalf of the Express, I would like to extend a thank you to the current holders of the Royal Bank Cup the Penticton Vees for lending the trophy out to the Express for this event. I also had a chance to speak with a number of the players who were in attendance and get their thoughts on the reunion of the 2006 Royal Bank Cup Champions.


The boys also had a shootout before leaving the ice for good. I had a chance to film it.


See below for the full story of the 2006 Royal Bank Cup Champion Burnaby Express.

The schedule for the 12th Express BCHL season was released today and here's how it breaks down and what stands out.

The biggest change this season is the league reducing it's schedule with each team reducing the number of games they play from 60 down to 56. The change in schedule reflects the leagues focus on having more games on weekends and reducing travel costs for clubs.

Earlier this off-season we learned that the season will begin for the Express with a pair of games in Chilliwack as part of the BCHL's showcase weekend on September 7th and 9th against Victoria and Cowichan Valley. (1 away, 1 home).

That will correct it self in the second half of the season and could be a benefit for the Express with the remaining portion of the schedule being very home heavy. The final home game before Christmas will be on Saturday December 15th when the Express will have a playoff rematch vs. the 4 time defending Coastal Conference Champion Powell River Kings. That will be the start of 15 of the final 25 games of the season for the Express which will be played at home. The Express will then have 2 weeks off for the holidays and their schedule will resume December 28th vs. Langley in the first of a home and home.

The schedule regularly alternates between home and away games for a month from December 15th until January 20th. Then they will hit the road for 5 straight games in advance of a 8 game home stand up until the final game of the season Saturday March 9th in Surrey.

With the BCHL going back to more divisional aligned playoff format and schedule, there are some significant changes as to how it shapes up this year. The biggest change sees the Express go back to the Mainland division with rivals Surrey and Langley. Chilliwack is back in the same division with the Express after playing last season in the Interior Conference. It will be great for the Express and Chiefs to re-ignite that old rivalry vs. Harvey Smyl's squad.

The biggest change in re-alignment when it comes to the Express sees the Prince George Spruce Kings having now moved into the Mainland Division. So that means that the two teams will be playing a few double headers over the course of the season. They will be on December 8-9 and January 26-27th in Prince George. The Spruce Kings will be in Coquitlam for a pair of games on February 22nd and 24th. The two teams will play singular games on October 20th and January 12th in Coquitlam.

Here how the full schedule breaks down for the Express this season:

They will play 32 of their 56 games vs. their Mainland Division rivals. (4 home, 4 away) They will play 1 home game and 1 away game vs. the 5 Island Division clubs. (Victoria, Cowichan Valley, Nanaimo, Alberni Valley, Powell River) With the Express playing Cowichan and Victoria at the showcase weekend, the Express will play a total of 3 head to head games vs. those two teams. That leaves 12 games 1 home and 1 away vs. the 6 Interior Division clubs.

One positive about the new schedule format means that the other 15 teams in the league will all visit Coquitlam and vice versa.

Here's some other dates that stand out.

3 times this season the Express play 3 games in 3 nights.