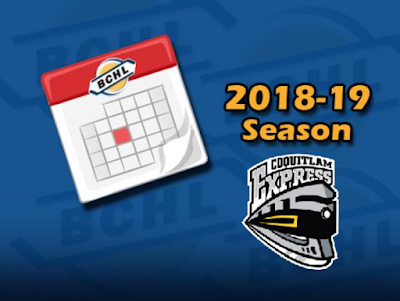 We can officially begin to countdown to hockey season now that the BCHL has released the schedule for the 2018-19 season. Click here for Express full 18-19 schedule

56 of the 58 games are officially set. The final two games to be determined are the annual showcase games that will be played at the showcase in Chilliwack from September 20-22.

As has been the case in previous years, the Express will start the season with a number of games played on the road. They will start on opening weekend with a pair of games on Friday September 7th in Surrey, then the next night they will be in Langley. The home opener is Sunday September 23rd vs. Salmon Arm.

One of the unique elements of the Express home schedule is the vast majority of games that will be played on Friday nights at 7pm and Sunday afternoons at 3pm. They will do that 6 times over the course of the season. Not one of those occasions will the Express have a road game on a Saturday sandwiched in between. Only once will the Express play three games in 3 nights, an Island trip November 30th to December 2nd with visits to Victoria, Nanaimo and Alberni Valley.

The Express have two Wednesday 12pm home games on Halloween vs. Langley and Surrey on January 16th.

They will start the season with 11 of their first 12 games against Mainland division opponents. This will be a good time for the Express to use a strong start to accumulate points that can put them in good standing in the division and help their footing within the division for the season. 6 of those 11 divisional games will be played on the road.

After the first four games on the road in the opening two weekends of the season, the Express will have a 5 game home stand which is part of a run that will see them play 13 of their next 16 games on home ice from September 23rd to November 7th. Two of those road games in this stretch are short trips to Surrey and Chilliwack on Friday October 5th and Saturday the 6th. Their other road game in this stretch will be the Express visit to Penticton on Wednesday October 24th. The Vees will make their visit to Coquitlam a month later on Friday the 23rd.

Early January will see the Express have another 5 game homestead from January 9th to the 18th.

From that point forward the Express will only have 3 home games in their final 14 games. Two of those games will be play consecutively on Friday February 8th and the defending Fred Page Cup and Doyle Cup champion Wenatchee Wild will visit on Sunday the 10th which is the Express final home game of the season. They will play their final four games of the season on the road with an Island division trip to Powell River and Cowichan Valley. Then visits to Vernon and Surrey in the final week of the regular season.

Posted by Eddie Gregory at 7:44 PM No comments: 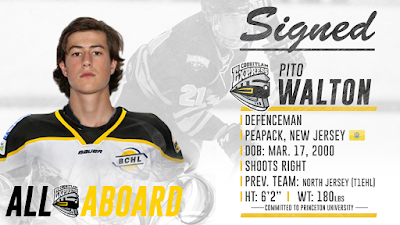 The Coquitlam Express have signed a commitment letter with defenceman Pito Walton (99).

Walton is a Peapack, New Jersey native where he spent the 2017-18 season with the North Jersey Avalanche T1EHL. In 27 games he tallied 4 goals 11 assists for 15 points.

“I'd call myself an offensive defenceman. But I take care of the defensive side of the game first. You see in the NHL today that the defence is a big part of the offence. The NHL player I model myself after is Pittsburgh's Kris Letang” says Walton.

“He is a very smart defender with a high IQ. He skates well and will be a very strong part of our back end. He is a 200 ft player that can make an impact on the attack or defending. Pito possesses a heavy shot and we are excited to add a player of his character and abilities.” Says Express Head Coach and GM Jason Fortier.

“Coquitlam sounded like a great place to play. Speaking with Jason Fortier, I wanted to be a part of it right away.” says Walton.

Walton is committed to Princeton University for the fall of 2019. He feels his time with the Express will be very helpful to prepare for Princeton. “Coquitlam will be a great spot to get me prepared. Working on my game every day, competing against very skilled players and great competition will be a great way for me to get better.” says Walton.

Welcome to the Express Pito.
Posted by Eddie Gregory at 8:25 PM No comments: