Tuesday I spoke with the new Head Coach of the Coquitlam Express Barry Wolff about his new role. We discussed how he got the job, what he sees in the Express roster he takes over. And what is next when it comes to re-building the Express.
Posted by Eddie Gregory at 12:16 PM No comments:

A veteran of BCHL experience is the new Head Coach of the Coquitlam Express. Tuesday the Express announced Barry Wolff is the new bench boss.

See the full press release from the Express:

The Coquitlam Express are proud to announce Barry Wolff as the new Head Coach. Barry is the 5th coach in the history of the Express organization.

The Kelowna, B.C. native comes to the Express highly recommended from numerous members of the NCAA coaching fraternity. He has spent the last year as Head Coach & G.M. of the Fernie Ghostriders, of the Kootenay International Junior Hockey League. Wolff earned KIJHL Coach of the Year honours, leading the Ghostriders to a 35-13-1-3 record and an Eddie Mountain Division Championship this past season.

Barry has 10 years of head coaching experience, 3 of which were spent with the Quesnel Millionaires from 1996 to 1998. His career highlights include a BCHL Coach of the Year Award (1998), a Fred Page Cup Championship (2005, Surrey Eagles) and international experience as a member of Team Canada West’s coaching staff (2010, World Junior ‘A’ Championships).

"I am very excited to be joining the Coquitlam Express hockey organization. The Express have a strong track record for developing great players and a winning tradition that dates back to the Royal Bank Cup Championship. I would like to thank the Express ownership group for giving me this opportunity to build on such a strong foundation in a great community!" – Barry Wolff.
Posted by Eddie Gregory at 6:08 PM No comments: 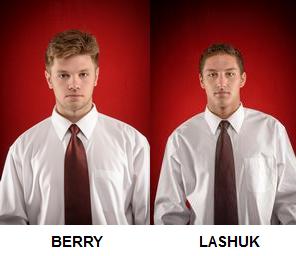 The second of the three January 10th trades the Coquitlam Express made is now complete.

With the elimination of the West Kelowna Warriors from the Interior Conference Finals by the Penticton Vees, it has now been finalized and released who the Express acquired as the future considerations in the deal that saw the Express send captain Mitch Nardi to West Kelowna.

The future considerations the Express received in the deal are defenceman Matthew Berry-Lamontagna (93) and forward Brent Lashuk (94).

Berry-Lamontagna will be a 20 year old defenceman next season. The Vancouver native stands 6'0 and weighs 200lbs. In 65 career BCHL games split over the previous two seasons with the Warriors he has 2 goals and 13 assists for 15 points. In the playoffs he added 5 assists in 10 games this season. He also has 51 games of WHL experience with the Prince Albert Raiders where he scored 2 goals and 2 assists for 4 points.

19 year old Brent Lashuk will be entering his second BCHL season this fall. In his first season in the BCHL the 6'2 Kelowna native scored 9 goals and 11 assists for 20 points in 42 games. He dressed for 6 games during the playoffs this year adding two assists.

The Express would like to welcome Brent and Matthew to the club.

The final trade to be completed that the Express made on January 10th is the one that sent forward John Siemer to the Penticton Vees. The details of the future considerations the Express acquired in that trade will be released shortly following the conclusion of the Vees season.

Posted by Eddie Gregory at 10:09 AM No comments: