EXPRESS SLOPPY IN FIRST OF 3 IN A ROW VS. EAGLES 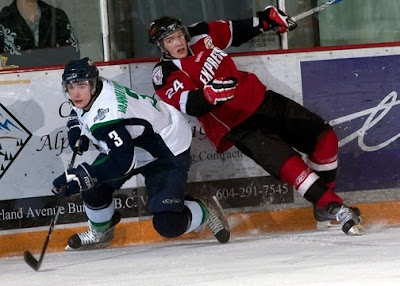 The Burnaby Express reverted to their sloppy ways in a 5-2 home ice loss to the Surrey Eagles in the first of 3 straight games vs. their Lower Mainland counterparts.

The opening minutes of the hockey game were a sign of things to come for a full 60 minutes as the Express coughed up the puck resulting in Eagles chances.

Surrey opening the scoring on a goal by Grant Toulmin blasting home a shot from the high slot.

Burnaby pulled even on the powerplay with Alex Petan banging home the rebound of a Chris Van Duynhoven shot.

An Express turnover at the Surrey blueline led to the Eagles taking the lead to the dressing room after 1 period. Adam Basford picked off a pass and scored on the breakaway in the final minute of the 1st period.

Surrey took the 2-1 lead to the dressing room. But it would have been a larger advantage for the Eagles were it not for Harrison May who came up with a number of clutch stops.

It was much of the same for the Express in the second period. May stopped Grant Toulmin on a breakaway in the opening two minutes of the 2nd period to keep the Express down by just a goal for the time being at least.

Andrew Wallace scored less than 5 minutes into the second whacking home a rebound to give Surrey a 3-1 lead with a powerplay goal.

Burnaby had a reply minutes later with a powerplay goal of their own with Zac Ashdown blasting home the rebound of a Garrick Perry shot for his 5th of the season.

Then with Rich Manley sitting in the box for cross checking, the Eagles re-stored their two goal lead.

Andrew Wallace put a perfect pass on Bradley McGowan's who scored coming in backdoor from the blue line.

Again, it could have been worse for Burnaby were it not for the efforts of Harrison May. His strong play kept the Express from being run out of their own building.

Surrey iced a strong night on the powerplay scoring their 3rd powerplay goal in the third period off the stick of Richard Vanderhoek just 8 seconds into a David Dotan penalty.

The win snapped Surrey's 4 game losing streak. And it was just their 4th win in their last 16 games dating back to December 9th.

Burnaby is now 2-3 under the guidance of Darcy Rota as Head Coach. He has preached accountability and discipline and I will be interested to see how his team will respond in the rematch with the Eagles Friday night.

With the loss, the Express remain 4 points back of the Cowichan Valley Capitals for the 7th and final playoff spot in the Coastal Conference with 9 games remaining in the season.
Posted by Eddie Gregory at 9:59 PM