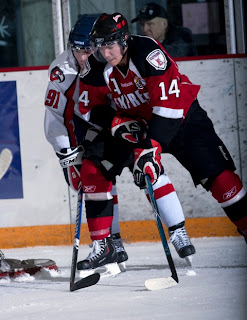 COQUITLAM, B.C. – The Coquitlam Express begin their 2010-11 campaign with a new home at the Poirier Sports & Leisure Complex, a new Head Coach in Jon Calvano and new leadership on and off the ice as Calvano named his captains for the season.

Garrick Perry, an Apple Valley, Minnesota native, who returns to the Express for his third season was named Captain by the coaching staff. Perry led the team last season in goals with 29 and is eager to take on the role of captain.

“I’m very humbled to be given this opportunity and to represent the Express,” Perry said.
“This is a great organization that I have had the pleasure of being a part of the past two seasons and I also look forward to working with my teammates in bringing the Express back to the top of the BCHL.”

Calvano chose Perry based on his commitment to the Express over the last two seasons and his overall leadership to the team as a 20-year old.

“With this season being his final season of Junior Hockey eligibility, he has shown a tremendous work ethic on and off the ice and a personality that makes the other kids gravitate to him,” Calvano stated.

Fellow 20-year old B.C. natives Brad Reid and Riley McIntosh were named Assistant Captains and will wear the “A” on their Express sweaters this season. Massimo Lamacchia, a 19-year old Ontario native was also named an assistant captain.
Posted by Eddie Gregory at 2:37 PM