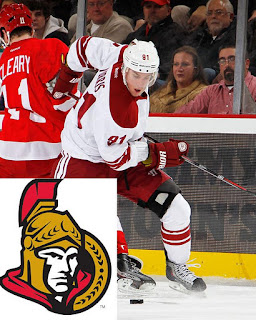 The Kyle Turris trade watch has come to its climax with the former Express star being traded today to the Ottawa Senators in exchange for David Rundbland and a second round pick.
Earlier this week Turris has been a healthy scratch for the last two games for the Phoenix Coyotes. The last 24 hours had plenty of speculation that Turris was on the verge of being traded.
The New Westminister native held out earlier this year while awaiting to get a new contract with the Coyotes. Turris re-signed with the Coyotes on a two year deal just days before the December 1st deadline which would have deemed him ineligible to play in the NHL this season if he didn't have a new contract.
In 6 games with the Coyotes this season, Turris didn't register a point and was a -2. He played 137 career games with the Coyotes scoring 19 goals and 46 points.
In 110 career games with the Express from 2005-07, Turris scored 103 goals and 193 points. He helped the Express win the 2006 Royal Bank Cup, the next year he set Canadian Junior A Hockey history by being the highest player drafted out of Canadian Junior A hockey getting selected 3rd overall by the Coyotes.
This trade will also re-unite Turris with former Express teammate Patrick Wiercioch who is a prosect with the Sens AHL affiliate in Binghamton.
Good luck Kyle with your new club.
Posted by Eddie Gregory at 11:19 AM