FAST HOCKEY TEAMS UP WITH BCHL 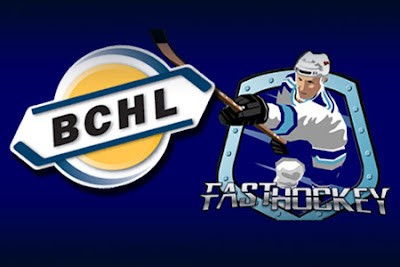 The BCHL announced Wednesday that they have teamed up with Fast Hockey to be the official Digital Media Partner.

They will be the new webcast providers for the BCHL. This is great news for the league. Speaking as someone who has done work with Fast Hockey in the past, I can tell you that the league has taken a good step in the right direction in bringing BCHL games to the fans, scouts and other supporters of the league. I was really happy to hear rumblings last season that this was a possibility.

The work i've done with them in the past will provide the league with a great product. Fast Hockey's reputation continues to grow from when I first worked an event for them in 2009. They're the official webcasting partner of Hockey Canada and Hockey USA. They have been at most major international events the last few years. And this partnership with the BCHL is another league in a long list of top notch Junior Hockey leagues from around North America that have already partnered up with Fast Hockey.

See the full press release from the BCHL below.

The British Columbia Hockey League and FASTHockey (http://www.fasthockey.com) announced today a long-term partnership offering a rich digital media experience to BCHL fans across the globe. The partnership begins immediately with broadcasting set for the 2012-2013 hockey season.

“Our agreement with FASTHockey not only provides us with the tools we need to raise the profile of our league but ensures our fans will have a first-rate experience watching games at home,” said BCHL commissioner John Grisdale. “We’ll continue to allow users to not only see live BCHL games but also get caught up on the latest highlights from around the league.”

Viewers will be treated to a world-class platform boasting breathtaking video, instant game archival for Video-On-Demand playback, advanced player features like pause, rewind, and fast-forward for live games, user generated instant replays, and full social integration. Additionally, they will be able to choose from home and away broadcasts so they can truly have a professional viewing experience.

“We are incredibly excited to partner with the BCHL,” said Marc Ruskin, President of FASTHockey, “Providing BCHL fans with a high quality experience, from video delivery through an array of interactive tools, will help support the league's digital media initiatives and provide the teams and players with some great tools for promotion and advancement.”

FASTHockey will have each BCHL rink outfitted with up-to-date streaming video hardware and in addition to the regular season and playoffs, will carry all 16 games at the inaugural Showcase event in Chilliwack September 7 to 9, 2012. Additionally, the BCHL and all of its member teams will take advantage of FASTHockey’s Content Editing and Syndication Suite empowering users to cut, share, and syndicate clips to their websites, blogs and popular social media platforms.

About FASTHockey Based in Boston, Massachusetts, with offices in Detroit, Vancouver, and Amsterdam (planned for 2012) FASTHockey serves as a digital media partner of National Governing Bodies including Hockey Canada, USA Hockey, and the German Ice Hockey Federation; collegiate governing bodies and institutions from the NCAA and ACHA; a massive number of junior hockey leagues and teams in North America; college preparatory and high schools; and youth hockey teams.
Posted by Eddie Gregory at 6:09 PM