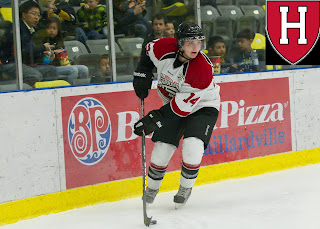 It is a monumental announcement for Kerfoot and the Coquitlam Express Hockey club to help send a player of Kerfoot's stature to such a prestiegious academic institution. This wasn't a decision that Kerfoot came to quickly. There certainly was plenty of discussion where he would make his decision about his academic future dating back a year ago when he was a prized rookie recruit for the Express entering the 2011-12 season.

The West Vancouver native is coming off a fine first season in the BCHL. He scored 25 goals and 69 points in 51 games played. In the playoffs he added 4 goals in 6 games vs. The Powell River Kings. Kerfoot's numbers earned him the BCHL's Coastal Conference rookie of the year and Coastal Conference Most Sportsmanlike player honours.

In June, the New Jersey Devils selected Kerfoot with their 5th round draft choice 150th overall. It was the 6th time that an NHL club had drafted a player directly from the Express orgranization. Kerfoot will return to Coquitlam for his second full season with the Express this season where he is expected to build on his fine first season in the league before heading off to Harvard.

Congratulations Alex.
Posted by Eddie Gregory at 10:25 AM