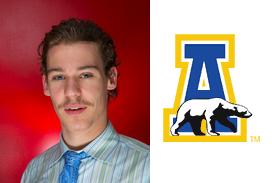 Coquitlam Express forward Brandon Morley has committed to the University of Alaska Nanooks.

The move will re-unite Brandon with his older brother Tyler who were teammates with the Surrey Eagles for two seasons from 2010-2012.

Morley was acquired by the Express earlier this season from the Surrey Eagles in a trade that saw Brady Shaw go the other way.

The Express commitment to player education over the course of this season has seen the Express have a total of 10 NCAA committed players on their roster. Along with helping secure Khaleed Devji a commitment to Salem State prior to the season.

Some of the former BCHLers on the Nanooks roster includes former Express captain Garrick Perry, Colton Beck, Richard Coyne among others.

Congratulations Brandon.
Posted by Eddie Gregory at 9:38 AM