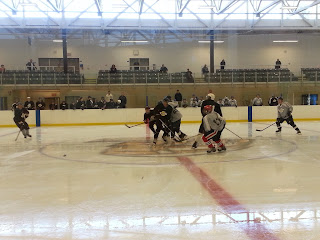 Day 2 of Express training camp was a last opportunity for players to make an impression on Head Coach Barry Wolff before he makes his first cuts and gets the group down to a more manageable number and the veterans hit the ice on Wednesday.

It didn't take long for the new Express bench boss to have a good idea of players he will consider moving forward with once camp gets ramped up another level on Wednesday. Once the veterans hit the ice, the competition level will go up and the coach will get a better idea of who can and who can't play against BCHL level competition and the identity of the 2013-14 Express will begin to take shape.

There are few pre-concieved notions going into the evaluation process. The players on the ice will have to earn their spots for this season. And that even includes players who are returning for this year. Barry Wolff is looking to build a team in his vision consisting of the best 22 players he feels will field the most competitive roster. And that is his main mandate in this training camp.

The veterans in attendance are chomping at the bit to get going. They're looking forward to hitting the ice Wednesday as their season truly gets going with their first official on ice session of the season. A good number of them have had a good first hand view of what is in camp so far having spent time behind the bench of the scrimmages for the first two days.

Wednesday I had a chance to speak with the Express Head Coach to get his assessment of what he's seen in the first two days of training camp.

Posted by Eddie Gregory at 1:39 PM