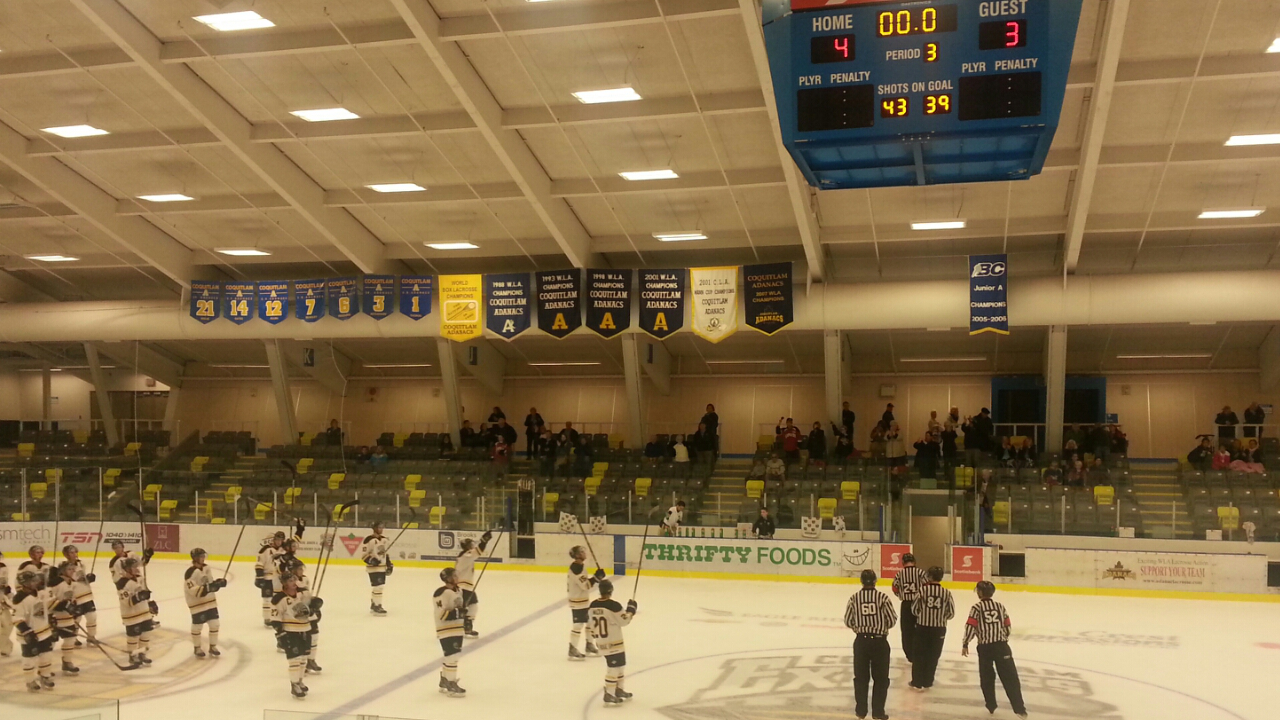 Third period goals by Nic Rasovic and the second and third goals of the afternoon by Brett Supinski lead a enormous rally for a 4-3 win over Nanaimo for just the second victory of the season for the Express. Click here for boxscore

There aren't many times when just the second victory of the season can be an emotional one, but that certainly can be said for the Express on this occasion.

Nanaimo entered the game riding a four game winning streak and took their first two games of their Mainland road swing with wins over Surrey and Langley. They got off on the right foot on a goal by Nicolas Carrier scoring on a deflection that slid through the legs of Brayden Krogfross.

In each of the previous two outings for the Express the opposition would get an extended 5 on 3 power play and would score on it to eventually come away victorious. Sunday it was the Express' turn for a extended 1st period 5 on 3. Brett Supinski scored his first of the game on the advantage to even the score for the Express at 17:31 of the first period.

As the Express continue their work to try and improve and turn the ship in the right direction there were positive signs throughout the course of Sunday's game. They consistently were able to establish a cycle in the offensive zone that hasn't been a element of the Express game earlier this season. That is part of the reason why the Express finished the first period with 18 shots on goal.

Jake Wozney playing in his first BCHL game gave Nanaimo a 2-1 lead in the second period banging home the rebound following a won face-off in the Express end of the rink.

San Jose Sharks draft pick Jacob Jackson gave Nanaimo a 3-1 lead when his shot beat Krogfross over the glove from the left wing.

In order for the Express to get back in the win column it was about finding ways to do the little things well incrementally over the course of the game. That included improvement in the discipline department and penalty killing. They certainly ticked that box off on Sunday.

The biggest penalty kill of the game came midway through the third period with Nic Rasovic in the box for elbowing. That capped off a a perfect 3 for 3 game for the Express while a man down. In order to have a strong night while a man down you need a big save from your goaltender. Brayden Krogfross came up with his biggest making a save on Jackson from the slot to keep the Express down just a pair. Krogfoss finished with 36 saves to pick up his second win.

Following the conclusion of the Rasovic penalty he picked up a Jivan Sidhu clearing attempt coming out of the box and scored his first of the season on the backhand.

That goal gave the Express the boost they needed for their big finish. They re-established their cycle and began to press for the equalizer. It came with just over two minutes remaining in the third period as Supinski found himself with the puck on his stick and eye to eye with Guillime Decelles and the Union committed forward scored top shelf for his second of the game.

Then in the final minute Brendan Lamont like a bull in a china shop diligently worked the puck in the Clipper zone deep and eventually got the puck to the net leading to a scramble and Supinski capped off his first BCHL hat-trick to give the Express their lone lead of the night with just 32 seconds to play.

The Express battled hard for the full 60 minutes and were rewarded for their effort. They finished with a season high 43 shots on goal.

Next weekend the Express will hit the road for it's first real road trip of the season with visits on the way to Alberni Valley, Cowichan Valley and Powell River.
Posted by Eddie Gregory at 5:23 PM