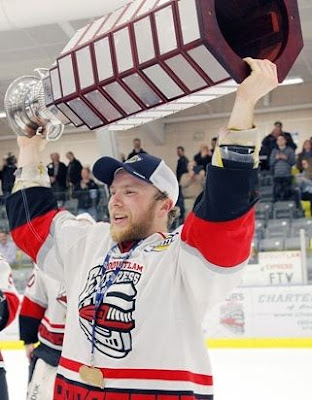 Veteran forward Brendan Lamont has committed to SFU for this coming season.

The 21 year old Langley native completed a 4 year BCHL career dressing for 240 games with the Merritt Centennials, Trail Smoke Eaters, Penticton Vees and playing the final season and a half of his career with the Express. He tallied 45 goals and 78 assists for 133 career BCHL points. He added another 13 points in 38 career playoff games. He also had 1 goal at the 2014 Western Canada Cup in Dauphin Manitoba with the Express.

Lamont was acquired by the Express in January 2014 from the Penticton Vees. He would enjoy some of the most memorable moments of his career in Express colors. He won the Fred Page cup with the Express in 2014. His final season in the BCHL would be his most productive with a career high 25 goals and 63 points while dressing for all 58 games.

His gritty, and honest hard working style made Brendan a well respected player in the locker and on the ice both from his teammates and opponents.

Brendan will see a familiar face when he walks into the locker room as his Express teammate from this past season Dustin Cave committed to SFU earlier this off-season.

Posted by Eddie Gregory at 9:36 PM