LATE RALLY NOT ENOUGH FOR EXPRESS IN SEASON OPENER

It was a case of just too little too late for the Express in a season opening loss to the Chilliwack Chiefs at the Prospera Centre in Chilliwack. 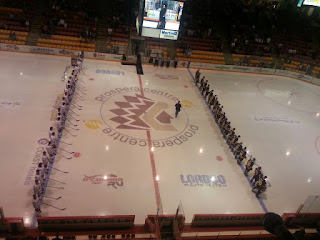 The Express rallied from a 4-0 third period deficit to cut it to 4-3 with 89 seconds to play in the third before an empty net goal sealed the 5-3 Chiefs win.  Click here for boxscore

Coquitlam showed plenty of jump in the opening 20 minutes. They fired the first 6 shots of the game.

Jackson Cressey and Austin McIlmurray each had good chances within seconds of each other in the first 5 minutes.

Rookie defenseman Charlie Barrow showed his vision and skating ability with a slap pass set up, then poking a loose puck through the goal crease when the Express were shorthanded.

The Express outshot Chilliwack 16-8 in the 1st period and Chiefs netminder Aiden Pelino was the difference from the Express not coming out the first period with the lead.

The chances weren't as plentiful for the Express in the second period. But their best came in the middle frame. Austin McIlmurray got a step behind the Chiefs defense and set up Colton Kerfoot who was completely robbed as Pelino got his pad down coming to his left.

7 minutes later the lead was extended when Austin Adam fired a great pass through the middle of the ice springing Vimal Sukumaran on a breakaway who made no mistake beating Krogfoss with a deke to the backhand.

One of the biggest stories for the Express in the game was their power play.

Late in the second period as a power play came to an end, Olivier Arseneau came out of the box and found the puck on his stick and he gave the puck to Germain who took the puck to the net and Jake Smith finished the rush sliding the puck inside the post for a 3-0 lead for Chilliwack after 40 minutes.

In the third a neutral zone turnover allowed Chiefs captain Jordan Kawaguchi to speed to the Express net on a breakaway. His backhand hit the post of Sukumaran was there to clean up the rebound by burying his second of the game for a 4-0 Chiefs lead.

Down four the Express showed some good character on opening night. Newly named captain Jackson Cressey from behind the Chiefs net set up Jonathan Irving who snapped home his first BCHL goal to get the Express on the lead.

Minutes later Colton Kerfoot who was snake bitten at times during the night with quality scoring chances got a break as he scored from the corner in the Chiefs zone as his wrist shot bounced off the glove of Pelino and into the net.

As I mentioned earlier the Express power play was a story in the outcome of this game. Bennett Morrison was penalized for hooking which was followed seconds later by a 5 minute major and a game misconduct for Sukumaran. The Express had a 5 on 3 for 1:46 and 3 minutes of 5 on 4 time on top of that. The Express weren't able to strike on the man advantage  and another power play minutes later when Jordan Kawaguchi was called for hooking.

The Express finished 0 for 9 on the night.

With 1:29 remaining in the third period Matt Michie won a face-off in the Chiefs zone and the puck found it's way to Owen Stout alone in front of the net and he made no mistake roofing it over the shoulder of Pelino.

But that would be as close as the Express would come as the Chiefs sealed the game on a empty netter by Jesse Lansdell.

Despite being on the wrong side of the final score, the Express throughout the night had their fair share of quality scoring chances. They finished with 42 shots but Pelino was solid in the Chiefs crease.

Pelino's counterpart at the other end Braden Krogfoss was solid in the Express crease. He didn't have much of a chance on the pucks that got past him on the night.

The Express are right back in action Sunday afternoon in Surrey.

Former Langley Rivermen forward Eric Udahl made his Express debut after being picked up Friday.