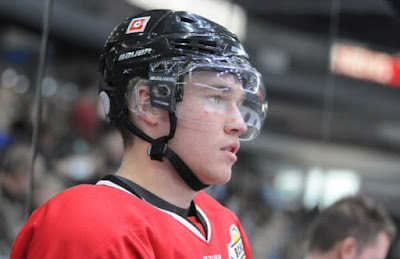 The Coquitlam Express have acquired 20 year old defenseman Ryan Coghlan (95) from the Merritt Centennials in exchange for future considerations.

This season he has 2 goals and 7 assists for 9 points in 23 games with Merritt this season. The move instantly gives the Express a defenceman with 169 career games of junior hockey experience in the BCHL and WHL.

In 88 career games with the Cowichan Valley Capitals, Nanaimo Clippers and Merritt Centennials he has 5 goals and 13 assists for 18 points and 88 PIM's. He also appeared in 23 career playoff games last season with the Nanaimo Clippers where they advanced to the Fred Page Cup final.

Coghlan also has 81 career WHL games with the Saskatoon Blades and Prince Albert Raiders with 7 goals and 12 assists for 19 points and 48 PIM's.

The Express return to action on New Years Eve when they will face Coghlan's old team the Merritt Centennials at 4pm in Merritt. They will kick off 2016 at home on Saturday night when the Express play host to the Prince George Spruce Kings. You can hear all the action on Tri City Radio CKPM FM 98.7.

Posted by Eddie Gregory at 8:30 PM