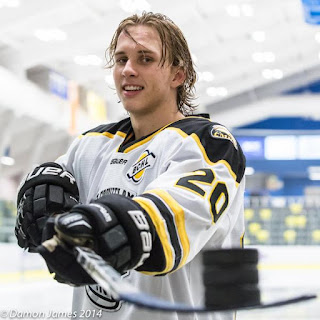 It's been more than a year since Corey Mackin played his last game in an Express uniform. But the honors still keep coming in.

The Coquitlam Sports Hall of Fame has named Mackin as their 2015 Senior Male athlete of the year.

The Philadelphia Pennsylvania native played two seasons with the Express from 2013-15. In his first year with the Express he helped the team win their second Fred Page cup BCHL championship.

The next year he would light up scoreboards around the BCHL. He would dress for all 58 games and lead the league in scoring with 50 goals and 54 assists for 104 points. Mackin would become just the third player in Express franchise history to score 50 goals in a season. It was the first time that an Express player who played in Coquitlam scored 50 goals in a season. The previous two players to do it Kyle Turris and Brodie Reid did it when the franchise was located in Burnaby.

Mackin's season was recognized by the BCHL by winning the Vern Dye award as league MVP and the Brett Hull trophy as the BCHL's top scorer. The 104 points Mackin registered in 14-15 is tied with Tyler McNeely for the second most points by a player in Express franchise history. He's also the second player in team history to win a BCHL scoring title joining Carlo Finucci who had 102 points in 2008.

In addition to recognition for his season by the BCHL, Mackin was honored nationally by being awarded the MVP and Top Forward by the Canadian Junior Hockey League.

In two seasons with the Express Mackin compiled 74 goals and 80 assists for 154 points in 115 games.

This past season Mackin completed his first season in the NCAA with Ferris State. He continued his success on the ice winning the WCHA rookie of the year award after 10 goals and 25 points in 41 games. Mackin's Bulldogs also won the WCHA championship and advanced to the NCAA tournament.

It's the second straight year a member of the Express have been honored by the Coquitlam Sports Hall of Fame. Head Coach Barry Wolff was named the 2014 Coach of the year.