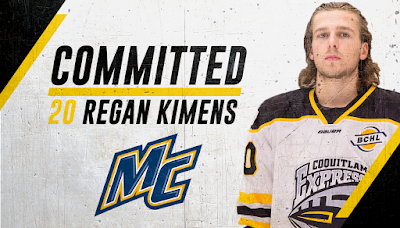 The Coquitlam Express are proud to announce that 1999 forward Regan Kimens has been committed to Merrimack College for next season.

The Concord, Ontario native has 6 goals and 19 points through 19 games this season, the same amount of points he totaled in all of last year. His offensive consistency has really stood out with points in 15 of 19 games this season. And to be more specific he has points in 15 of his last 17 games and had a 13 game point streak recently snapped after tallying 5 goals and 12 assists for 17 points.

"Just beyond excited to be a part of the future for this team. I can't thank the the coaching staff and the boys on the team enough for me getting here, I wouldn't have done it without them." said Kimens.

"Regan has been an excellent addition to the Express. He has earned the minutes he plays and is an honest player who works hard each game. Regan spent the summer training hard to become successful and when a player combines skill and effort he will always succeed." said Express Head Coach and General Manager Jason Fortier.