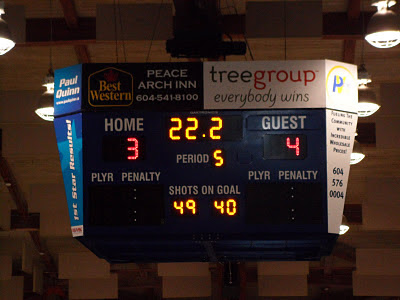 It was a game that kept you on the edge of your seat, especially in the final minutes of the third and into overtime as the Express dropped the Surrey Eagles 4-3 in double overtime.

Early on the story was the strong play of Eagles goaltender Andrew Hunt. He set the tone for the game in the opening minute with a great right pad save off Mitch Nardi.

The Express kept sending rubber Hunt's way in the second. He finally cracked as Petan and Georgeson broke in on a 2 on 1 shorthanded and Georgeson scored just his second of the season banging home the rebound of Petan's shot by driving hard to the net.

The lead lasted for 43 seconds as Sean McGovern wired a wrist shot past Khaleed Devji to tie the game at one. Just as the Eagles fans stopped celebrating the goal, the Express struck again as Alex Petan converted new comer Taylor Bourne's feed and re-stored the Express lead just 18 seconds after McGovern's goal. All three goals came in a span of one minute and one second.

Surrey began their push looking for the equalizer in the third period. Alex Petan got called for a questionable penalty in the neutral zone. The Eagles capitalized on the powerplay as Captain Tyler Morley wired a wrist shot over the glove of Khaleed Devji to tie the game at 2. Surrey's best period was by far the third. Devji however was putting up a pretty strong wall.

Late in the third the Express went ahead again as Brady Shaw banged home a rebound of a Clinton Atkinson with 2:50 to go.

This lead didn't last either as in the final minute Devon Toews fired a slap shot past a screened Devji to send the home crowd into a frenzy.

Let's go straight to the final minute of the second overtime where Malcom Mckinney was tripped up deep in his own zone and he was awarded the automatic penalty shot.

Mckinney looked as cool as a cucumber as he shaded to left and went in a slid the puck through the legs of Andrew Hunt to give the Express their second straight win. The goal sent the Express players and their parents in attendance into a frenzy.

Back in the first period Evan Campbell was assessed a 5 minute major and given a game misconduct for a blow to the head penalty for a hit on Deminco Hannoun.

The Express finish their 4 game in 5 day week Sunday afternoon when they host Victoria.
Posted by Eddie Gregory at 12:23 AM