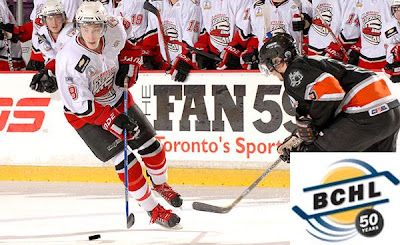 As part of the BCHL's 5oth anniversary celebration this weekend, the league announced it's top 50 players of all time Friday following an online vote by fans.
Fans were able to vote for the top ten players in each of the past 5 decades. Express alum and current Phoenix Coyote Kyle Turris was among the top players to make the list.
It's hard to ignore his contributions in the BCHL when Turris played his two seasons with the Express from 2005-07.
In his rookie season as a 16 year old, he was the Coastal Conference rookie of the year by scoring 36 goals and 36 assists for 72 points. In the playoffs he helped lead the Express to their first Fred Page Cup BCHL championship. Turris' dominance really started to take over once the Express advanced to the Doyle Cup vs. the Fort McMurray Oil Barons where the Express won the series in 6 games advancing to their first RBC.
On the national stage, Turris was magical. He scored the dramatic tying goal in the semi final vs. Fort William with just 11 seconds remaining in the third period. Then in the final, Turris was unstoppable. He scored a hat-trick and added an assist as the Express played their best game in the RBC defeating the Yorkton Terriers 8-2.
Turris finished the RBC with 7 goals and 13 points in 6 games and was named tournament MVP.
The next season all eyes were on the New Westminister native. In his draft year he didn't dissapoint with all the hype surrounding him. He ripped up the league scoring 66 goals and 121 points in 53 games. Perhaps it was a little prophetic that Kyle Turris scored his 50th goal that season in 39 games. If that accomplishment sounds familiar, it was also done by some guy named Wayne Gretzky with the Oilers many moons ago.
Following the season, Turris was named the top player in Canadian Junior A hockey and was the number 1 ranked prospect heading into the 2007 NHL draft. At the draft, it was Wayne Gretzky who made the call as the Phoenix Coyotes drafted Turris 3rd overall. It was a historic moment for the BCHL as it was the highest a player was ever selected directly out of the BCHL.
In his two seasons with the Express, Kyle Turris scored 102 goals and 193 points in 110 games.
To see the full list of the top 50 players click on the link below.
http://www.bchl.ca/leagues/newsletter.cfm?clientID=1413&leagueID=2393&page=57337
Posted by Eddie Gregory at 11:22 AM