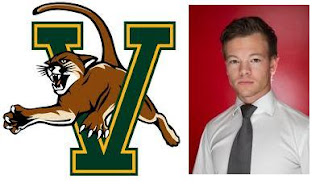 20 year old forward Malcom McKinney has committed to the University of Vermont for the 2013-14 season.

McKinney is the longest serving member of the Express playing in his 4th season with the Express. One of only a small handful of players to play in 4 seasons for the Express franchise.

He had a break through season for the Express in 2011-12 scoring a career high 21 goals and 53 points while dressing for all 60 games. This season he has 3 goals and 4 points in the first 10 games.

Following the 2010-11 season, he was a member of a select team of BCHL players that represented Canada at the Region Centre Cup in Podolsk Russia helping the team finish in 2nd place in the 4 team tournament vs. A Russian and Slovakian National team along with a team of select Russian Junior players.

Standing at 5'8, he may not be one of the biggest players on the ice, but he's known for being a physical presence. A key penalty killer with the ability to chip in offensively.

Posted by Eddie Gregory at 4:23 PM