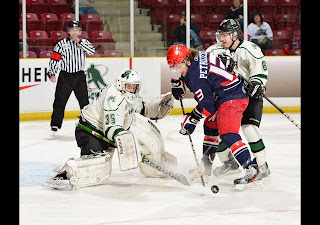 The Express continue making moves in an effort to get ready for the season opener at the BCHL Showcase on Friday vs. Merritt.

Wednesday they were part of a three way trade that sees the Express acquire 20 year old goaltender Gordy Defiel (93).

The Express acquired the rights to defenceman Pierce Eviston from the Vernon Vipers in exchange for future considerations.

Last season Defiel led the SIJHL in all major goaltending categories with 25 wins, 1.39 GAA, .945 save percentage, and 8 shutouts. In the playoffs he helped lead the Wilderness SIJHL championship and an appearance at the RBC Cup. On the national stage the Defiel went 1-3 in the round robin, but the Wilderness were 18 seconds away from an upset of the Brooks Bandits in the RBC cup semi final before Brooks tied it then winning in overtime.

Forster was originally acquired by the Express on January 10th as part of the deal with the Chilliwack Chiefs that saw the Express also acquire Ben Israel and Shay Laurent in exchange for Phil Zielonka. Forster had 1 goal and 6 assists for 7 points in 19 games with the Express last season.

Posted by Eddie Gregory at 7:21 PM