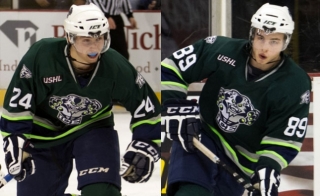 The Coquitlam Express have acquired brothers Canon and Bo Pieper from the Indiana Ice of the USHL.

Head Coach Barry Wolff expects the brothers to be key offensive contributors to the Express for this coming season.

The Roseville Minnesota natives have played the last two seasons in the USHL with Indiana in 2012-13 and Chicago in 2011-12.

Canon and Bo are both committed to attend Quinnipiac University in the fall of 2014.
Posted by Eddie Gregory at 11:24 AM