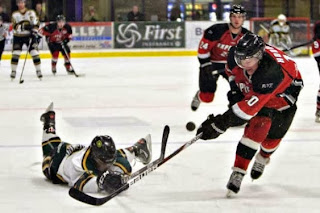 The Coquitlam Express got a boost to the blueline by bringing back a familiar face Wednesday.

They have re-acquired defenceman Zach Hodder from the Moose Jaw Warriors of the WHL.

The 20 year old Delta native played 43 games with the Express during the 2011-12 season. In those 43 games, Hodder was very productive piling up 12 goals and added 21 assists for 31 points.

The 12 goals he scored that season is the second highest total in a season by an Express defenceman.

He returned to the WHL last season where he split the season with Prince Albert Raiders and Medicine Hat Tigers. In 60 games he had 3 goals and 13 assists for 16 points.

This season he played 6 games with the Moose Jaw Warriors and had picked up 1 assist. He has 128 career WHL games with Vancouver, Saskatoon, Price Albert, Medicine Hat and Moose Jaw registering 8 goals and 30 assists for 38 points.

Hodder will make his Express re-debut tonight vs. the Surrey Eagles and will wear #2.
Posted by Eddie Gregory at 1:28 PM