It could very easily have been Lawson Fenton's best game of the season making 40 saves in a 2-1 Express win over the Wenatchee Wild. Click here for boxscore

Fenton's play kept the Express close allowing them to rally for the comeback in the third period.

It didn't take long to realize that the Express goaltender was going to have a busy night and he was on his game. 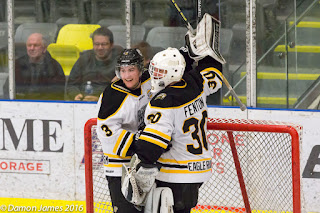 He turned aside all 17 first period shots to keep the Wild at bay. He made saves stretching out his right pad, scramble plays in his goal crease. But his best of the night was a glove save going to his left to steal a goal away from Alex Bates on a one timer on a hot pass from the left wing.

At the other end the Express were only able to muster 6 first period shots.

Brendan Harris found the lone crack in Fenton's armor early in the second period cutting into the slot and beating Fenton with a shot over his glove for his 10th of the season. For the rest of the night the Wild were shaking their head as they were unable to get another puck past the Express netminder.

In the third period the Express special teams allowed them to turn the game in their favour. It didn't start that way in the period however as they were unable to strike on a power play that carried over from the second period. 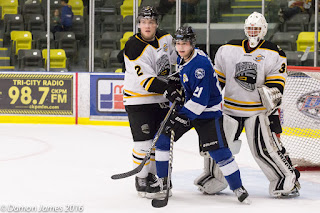 Minutes later the Express killed off a key Alex Ambrosio penalty keeping the deficit at one.

Then Fenton put an exclamation point on his stellar effort. In a span of about 35 seconds he made three key saves on close. All of those saves were thanks to Fenton finding a way to keep his pads flat and strong on the ice. 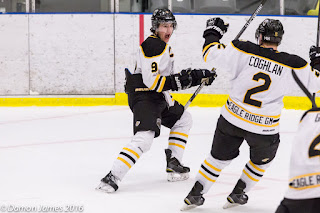 Jackson Cressey gave the Express their lone lead of the night finding the puck in front of Nieto and sliding it under the goaltender for his 26th goal of the season.. The Express finished with only 19 shots, but made their shots count.

The win concludes a season high 7 game home stand that saw the Express finish with a 4-3 record.

Sunday the Express will head down the road for an afternoon game with the Langley Rivermen.
Posted by Eddie Gregory at 11:32 PM