Tyger Howat made 41 saves allowing the Express to hold of Trail eventually winning 4-1 for their 3rd straight win on home ice. Click here for boxscore

The Express needed their goaltender especially in the first half of the game until the offense finally woke up.

It was more of the same for Trail in the opening minutes of the second period. Howat's best save of the night came when he came to his right and stacked the pads to deny Blaine Caton.

The game finally began to turn for the Express in the second period after killing off a tripping penalty to Owen Stout. Seconds after the penalty expired Stout set up Blake Hayward at the side of the Trail net to get the Express on the board.

Two minutes later Trail was called for too many men. On the ensuing power play, Charlie Barrow set up Owen Stout who beat Bailey MacBurnie up high to give the Express their first lead of the night. It was the second straight game that Owen Stout picked up 1 goal and 1 assist in the second period.

Mat Michie scored the third goal of the second period for the Express by going to the net and banging in a loose puck in the blue paint set up by Jack Surowiec and Cam Bertsch.

It was a rare night for the Express where the line of Jackson Cressey, Colton Kerfoot and Austin McIlMurray didn't have to shoulder the majority of the offensive load for the Express.

Kerfoot did have a goal and an assist for the Express. He capped off the scoring in the 3rd period on the power play by knocking a Jeremy Lucchini clearing attempt out of the air and snapping his 18th of the season past the glove of MacBurnie. The power play finished 2 for 4.

With a three goal lead the Express were able to go into shutdown mode and roll their lines making smart decisions with the puck in the final minutes allowing the clock to tick down to their 18th win of the season. The win put the Express above .500. 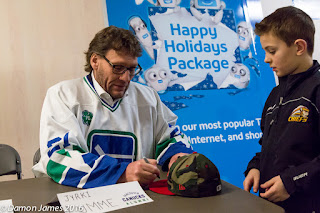