CAPTAIN DOES THE TRICK FOR EXPRESS VICTORY 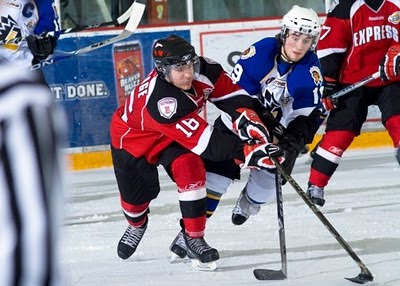 Dylan Herold picked up his 2nd hat-trick in his Express career leading the Express to a 4-2 home ice win over the Langley Chiefs Friday night.

The captain was among a number of players busting slumps in the Express victory.

Herold's 3 goals snapped a string of 4 straight games without a point. He also only had just 1 goal and 1 assist in his previous 12 games.

Langley's Colton Beck opened the scoring on a 2 on 1 break in the first period which saw the two teams manage just 7 shots apiece.

The captain pulled the Express even in the second period when he cleanly won a draw back to Stefan Gonzales and his point shot was tipped over the shoulder of Mark Frisen by Herold.

Less than 3 minutes later the captain struck again as a shot from the wing was stopped by Friesen, but he couldn't reel the puck in allowing the play to continue.

Moments later, Kolby Kulhanek made a nice little back pass to Herold who had a tap in for his second of the night.

The Express took their lead to the dressing room. But they began the third period shorthanded with Chris Van Duynhoven in the box for boarding. That was followed by a Burnaby penalty in the opening seconds of the third period giving Langley a 5 on 3.

It was Brad Reid however finding the back of the net. Mark Friesen went out to play the puck and coughed it up and Reid buried it into the empty to give the Express a 3-1 lead.

The goal for Reid snapped his 5 game pointless streak.

Trevor Gerling pulled the Chiefs back within one re-directing a Dennis Robertson point shot at 5:03.

From then on Nick Enegren took over. He stopped the rest of the rubber sent his way.

Enegren turned aside a total of 18 of 19 Chief shots in the third period. And stopped 39 of the 41 shots sent his way over the course of 60 minutes.

The Express wrapped up the scoring when Dylan Herold completed his hat-trick by lifting a backhand from his own zone that dribbled into the empty net just before the clock hit 0:00.

Cowichan Valley didn't do the Express any favours as they remain 6 points up on Burnaby in the race for 7th as Mike Hammond continued his hot play with 1 goal and 1 assist as the Caps tied the game in the third period then won it in overtime defeating the Surrey Eagles 2-1.

Cowichan Valley continues their road swing in Merritt Saturday. Then they're in Salmon Arm on Sunday.

Burnaby now heads on the road for a pair of games this weekend vs. Powell River.

Sunday's game vs. the Kings will technically be a home game for the Express that will be played in Gibsons.
Posted by Eddie Gregory at 1:53 PM