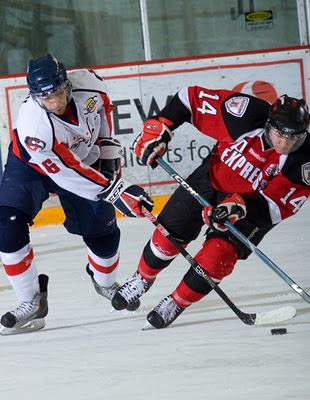 Sunday the Express played their final home game ever in Burnaby. The Express left the Bill Copeland Sports Centre on a winning note with a 5-3 win over the Cowichan Valley Capitals.

Garrick Perry led the Express attack with a pair of goals. He now leads the Express with 27 markers this season. Perry is one up on Brad Reid who put the game away with an empty net goal at the final horn.

The game was a back and forth affair with Perry opened the scoring in the opening period.

But by the time the 2nd period was 30 seconds old Cowichan Valley had a 2-1 lead.

Zac Ashdown pulled the Express even with a shorthanded goal after Brad Reid's pressure resulted in Laurent Brossoit coughing up the puck and Ashdown wiring the puck into the vacated cage.

Ryan Green re-stored Cowichan Valley's lead off the rush wiring a wrist shot over the shoulder of Robin Billingham.

Perry pulled the Express even before the period was done when he played catch with Kolby Kulhanek, then Perry roofed a backhand over the glove of the Caps goaltender.

The game remained tied until Rich Manley broke the deadlock on a scramble in front of the Caps net with less than 3 minutes remaining in the third period.

The Express will wrap up the season next weekend on the road in Quesnel, Prince George and Williams Lake.
Posted by Eddie Gregory at 9:31 PM