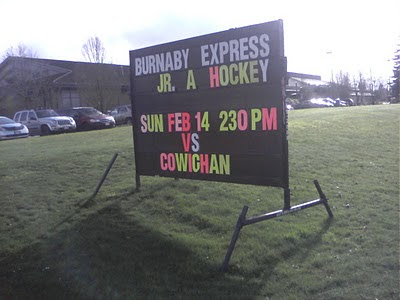 As the Express prepare for this afternoon's game vs. the Cowichan Valley Capitals, we are reminded that today's game at the Bill Copeland Sports Centre is the final game the Express will play in Burnaby.

With no playoffs in the Express future, it's time to reflect on the Express' time in Burnaby where they have called home for 5 seasons.

It needs to be said that the team's time in Burnaby can't be forgotten. A significant portion of the Express history was played on Joe Sakic way.

While in Burnaby, the Express carved out a history with moments and achievements that will forever be a part of the story of this franchise in the BCHL.

The Express came to Burnaby following the 04-05 season with a 5 year lease agreement for the use of the Bill Copeland Sports Centre.

Things couldn't have gotten off to a better start for the Express in their new home. In year one the Express went straight to the top of the Canadian Junior A Hockey mountain winning the Royal Bank Cup.

That run alone has so many memories along the way that will last a life time for the many people who have followed this Express team.

Who can forget the feeling when the Express finally knocked off their long time rivals the Chilliwack Chiefs in a playoff series in the second round with a 6-3 win in game 5 in Chilliwack. Tyler McNeely, had a hat-trick in that game to cap off a fantastic series.

The second round triumph proved to be a spring board for that team and gave them the confidence that they could do something special that spring.

A few weeks later on a Easter Monday at the Bill Copeland Sports Centre Tyler McNeely capped off his outstanding BCHL playoff run by scoring the overtime winner in game 6 of the BCHL Finals to clinch the BCHL championship.

From there it was off to Fort McMurray to face the Oil Barons for the Doyle Cup. The Express took a 3-2 series lead into game 6 at the Bill Copeland Sports Centre.

The Express scored early and Keith Seabrook scored often finishing with a hat-trick in a 6-0 white washing to punch the Express ticket to the Royal Bank Cup.

At the RBC, the Express started off slow losing their opening game in overtime to the Streetsville Derbys 4-3.

The Express bounced back to win all their games the rest of the way. The comeback in the semi finals vs. Fort William is stuff of legend in Express lore. The Express were down 2-0 with less than 2 minutes remaining. The Express got back within one, then Kyle Turris then tied the game with 11 seconds remaining.

In overtime Mark Soares wired a shot past Carter Hutton to advance the Express to the Royal Bank Cup Final.

In the RBC final, the Express finally hit their stride and dominated the Yorkton Terriers right from the drop of the puck. Kyle Turris played arguably one his best games ever finishing with 3 goals and 1 assist. He could have had 5 goals that night.

Burnaby trounced Yorkton 8-2 to bring the RBC back to Burnaby and became the first BCHL team to win the National Championship since the 1999 Vernon Vipers.

The following season, the Express returned with a roster that looked significantly different than the one that won it all. But they still had Kyle Turris. He would go on to tear up the BCHL like few had done in recent years. Turris scored 50 goals in his first 39 games. He finished the campaign with a BCHL leading 66 goals and his 121 points were second in the BCHL behind Tyler Bozak.

That season, many eyes were on the kid from New Westminister. He was the player to watch in the BCHL. Many NHL scouts were following his progress throughout the season.

After the season was done, Turris entered the NHL draft as the number 1 ranked North American skater among his draft class. In June he was selected 3rd overall by Wayne Gretzky and the Phoenix Coyotes. The highest ever a Junior A player had ever been drafted.

Year 3 in Burnaby the question was, who would fill the offensive void left behind by Turris, Jovan Matic, Tyler McNeely and Chris Rengert who combined piled up over 250 points between the 4 of them.

To help fill the void, Carlo Finucci who spent time tutoring under the names mentioned above, took full advantage of the opportunity to have the stage to himself. Finucci went in to win the BCHL scoring championship with 102 points. Finucci became the first player in Express history to lead the league in scoring.

Brodie Reid who was acquired in the off-season, became the Express second player to score 50 goals in a season finishing with 52. And Cody Campbell his linemate had a very consistent season scoring 87 points.

The final 2 seasons certainly haven't been ones to remember in Burnaby with the Express finishing out of the playoffs each time.

But this piece is about remembering and never forgetting the Express time in Burnaby.

It's about remembering the players who laid down the foundation and helped create these wonderful memories.

It's about remembering if you see a player down the road continue his development and play professional hockey, possibly in the NHL, remember that he applied his trade in Burnaby Express colors.

Now to wrap, we have to thank the City of Burnaby and the Bill Copeland Sports Centre for providing the Express a home the last 5 seasons.

Our time here will never be forgotten with memories that will last a lifetime.

Thank you Burnaby.
Posted by Eddie Gregory at 11:50 AM