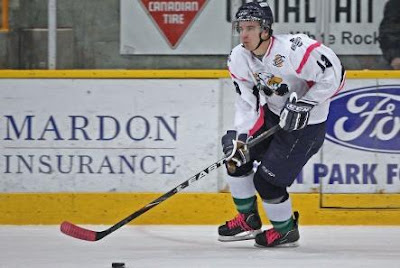 The Express have had some trouble in the last 8 games getting scoring from their hired guns.
Today they did something to help rectify that problem picking up the rights to veteran and Coquitlam resident Mike Krgovich from the Salmon Arm Silverbacks in exchange for forward Paul De Jersey and defenceman Justin Elliot.
This is the 2nd trade in a few weeks for Krgovich who was traded earlier this season by the Surrey Eagles in exchange for Josh Monk.
Krgovich put up 4 goals and 4 assists for 8 points in 13 games with the Eagles then dressed for only a single game after his trade to the Silverbacks. Last season Krgovich was Surrey's representative at the All Star game. In his BCHL career he has 29 goals and 85 points in 105 games.
De Jersey played parts of 3 seasons with the Express tallying just 4 goals and 8 points in 60 games.
Elliot was in his first season on the Express blueline and didn't register a point in 19 games.
Krgovich is an accomplished lacrosse player as well winning the Minto Cup Canadian Junior A championship with the Coquitlam Adanacs this past summer. He will make his Express debut Wednesday night when the Express host the Nanaimo Clippers.
Posted by Eddie Gregory at 5:23 PM