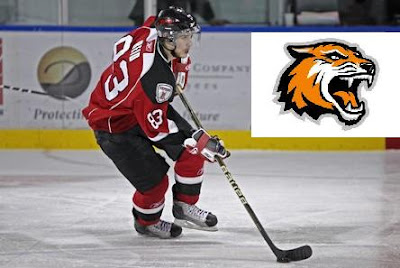 20 year old Express forward Brad Reid has committed to the Rochester Institute of Technology for the 2011-12 season.

Reid is in his second season with the Express after coming over from the Penticton Vees prior to the 09-10 season. Last year he scored a team leading 55 points and scored 27 goals. Numbers that earned him the Express MVP honours.

This season the Delta native has 11 goals and 27 points in 27 games.

The Express now have 2 players committed to scholarships for next season. Captain Garrick Perry committed to the University of Alaska Fairbanks earlier this season.

On a side note, it is interesting to see who Reid will be teammates with next season. Powell River's Matt Garbowsky and Daniel Schuler, Surrey's Brad McGowan who is 2nd in BCHL scoring, and Langley's Brandon Thompson. They will join former BCHLers Adam Hartley (Express & Eagles), Scott Knowles (Eagles) Eliot Raibl (Bulldogs, Millionaires, Eagles) and Josh Watson (Kings).
Posted by Eddie Gregory at 6:53 PM