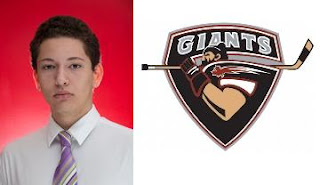 The Vancouver native was in his first season of junior hockey. He had 4 goals and 2 assists in 29 games with the Express this season.

Vancouver Giants GM Scott Bonnor was spotted in the rink Sunday for the Express game vs. the Surrey Eagles.

The signing of Leone is the latest piece added by the Giants who are in the middle of a massive re-building project.

He will make his WHL debut for the Giants during their upcoming Alberta road trip.

The Express would like to wish Luca the best of luck in the future.
Posted by Eddie Gregory at 2:55 PM