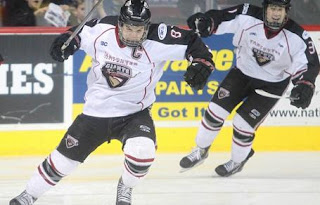 The Vancouver Northwest Giants of the BC Major Midget League are champions of the Macs AAA Midget tournament for the second time in four years.

They won the one of the biggest Midget tournaments with a 3-2 overtime win over the Carolina Junior Hurricanes.

Winning on Saddledome ice capped off a perfect week for the Giants which saw them go a perfect 7-0.

The game was dramatic all game long that went down to the wire. Carolina held a 2-1 lead in the final minute of the third period. With just 12 seconds left on the clock Brandon Del Grosso scored sending the game to overtime.

It was still undecided after a 10 minute overtime. Then at the 14 minute mark of the second overtime Jackson Cressey scored the tournament winning goal. Anthony Conti scored for the Giants in the first period.

Eric Margo was named to the tournament's second all star team.

Express Head Coach and General Manager Jon Calvano coached the Giants before coming to the Express in the spring of 2010. He guided the Giants to a Macs tournament championship in 2009. That win came after the Giants came knocking on the door losing in the final the previous two years.

Posted by Eddie Gregory at 6:13 PM