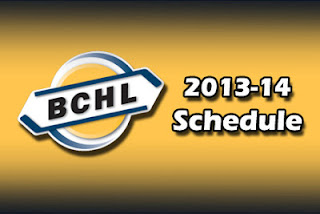 The full 2013-14 schedule for the Coquitlam Express has been released by the BCHL. It will be a 58 game season which is an increase of two games from last season that saw the Express play 56 games.

Their season starts in Chilliwack on September 6th vs. the Merritt Centennials. Then they will play Sunday the 8th at 11am vs. the Alberni Valley Bulldogs as part of the second annual BCHL showcase.

The Express will then play a pair of road games vs. Mainland division rivals the defending Fred Page Cup champions and RBC Cup semi finalists the Surrey Eagles on Sunday September 15th. Then they will be at the Langley Events Centre on Friday September 20th to face the Langley Rivermen. It will be the first game that former Express Head Coach Jon Calvano who is now an assistant GM and Coach with the Rivermen will face his former squad.

The Express will play their home opener the next night in the second of a home and home with the Langley Rivermen on Saturday September 21st. That is part of a 4 game home stand for the Express. All vs. Mainland division rivals Langley, Prince George (2), Chilliwack.

At first glace of the schedule what stands out for me is the amount of home games the Express will play up until January 24th.

That means the Express have to make up their remaining road games in the final stretch of the season.

Starting Saturday January 25th in Prince George, the Express will play 8 consecutive games on the road.

Among those 8 games away from the Poirier Sports and Leisure Centre, the Express will play a pair of two game sets in Prince George January 25-26, then come back to the lower mainland for one game in Surrey Wednesday January 29th, then head right back up to Prince George for games Saturday January 31st and Sunday February 1st.

The following weekend the Express will head to Powell River, Victoria and Cowichan Valley for a 3 game swing through the Island division.

To end the season the Express will play 3 of their final 5 games on home ice wrapping up the regular season schedule with a home and home with the Chilliwack Chiefs February 28th in Coquitlam and March 1st in Chilliwack.

As we learned in the 2012-13 season, the record within the division is key for any team to have success and compete for a playoff spot. This season the Express will play 34 of 58 games against Mainland division foes. The start of the season is very heavy with games vs. Mainland division opponents following the BCHL showcase where they play 9 in a row and 10 of their next 11 vs. division rivals.

Here's a break down of the schedule by the numbers:

34 games vs. Mainland division opponents. 9 vs. Surrey and Prince George, 8 vs. Langley and Chilliwack.

13 games vs. Interior Conference opponents. (1 home, 1 away) *The Express will play 3 games vs. the Merritt Centennials including September 6th at the BCHL Showcase.