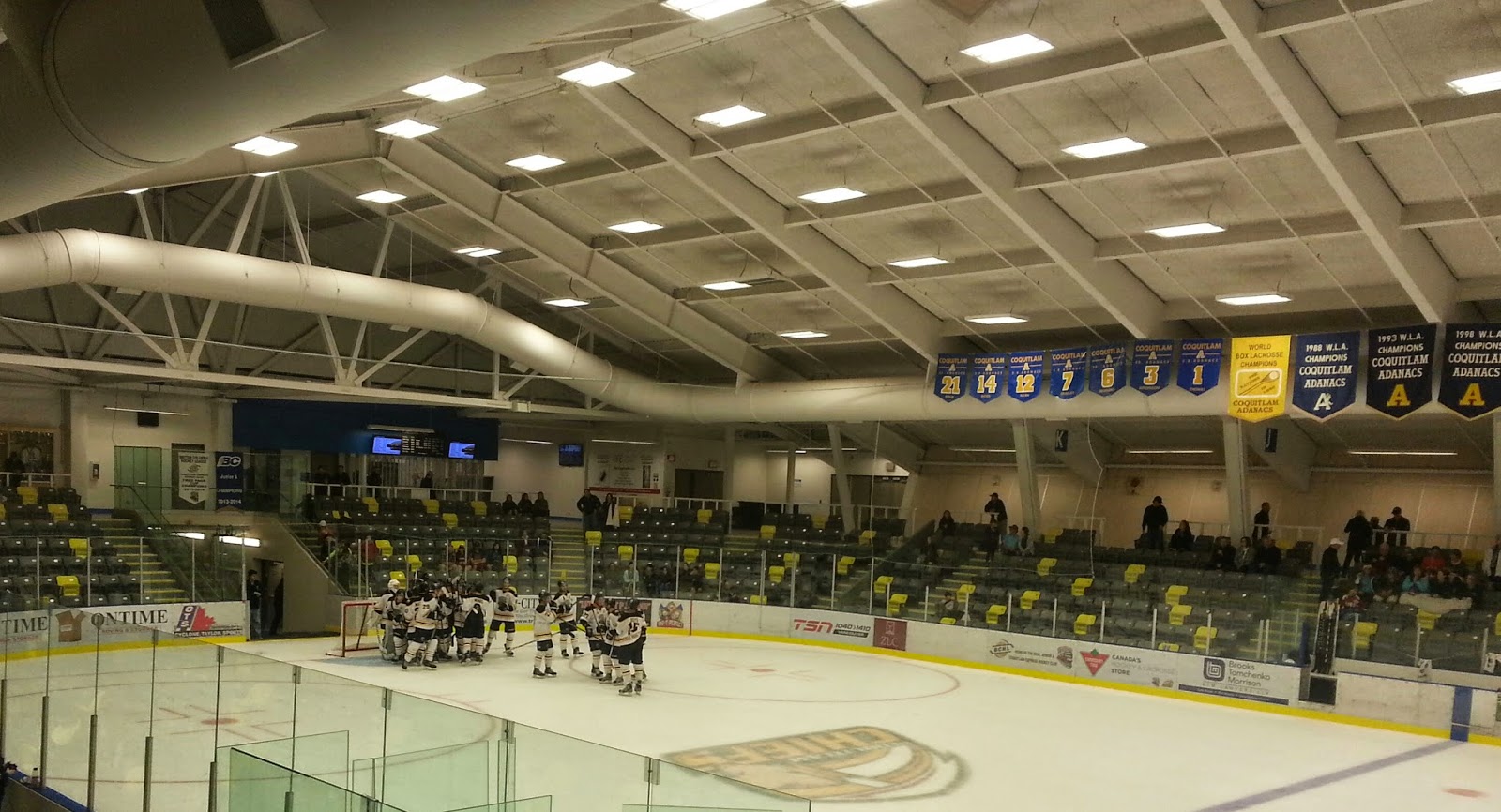 
It was a tight contest for the full 60 minutes. Coquitlam has shown some good signs of improvement in each of their last two games from their first two outings of the season.


There was plenty of energy for the Express to start of the contest peppering Prince George goaltender Alex Brooks-Potts with 7 shots through the first 5 minutes of the game.


The visitors opened the scoring late in the first period as Braiden Epp got a half step in behind the Express defence in the neutral zone picking up a pass and walking in alone on the breakaway and beating Express starter Brayden Krogfross with a shot over the glove.


Rookie Owen Stout pulled things even for the Express midway through the second period as he banged home his own rebound of a Nic Coltura pass for a powerplay goal and his first BCHL goal.


One of the biggest difference's from Friday's contest to Saturday's was the Express ability to shut down the Spruce Kings top line of Justin Rai, Jeremiah Luedtke and Chad Staley. Friday they combined for 7 points with Rai scoring three times. The Express started the game for the most part matching up their top line of Brett Supinski, Joey Santucci and Corey Mackin head to head. But that changed in the second period with the line of Cody Boyd, Colton Kerfoot and Brendan Lamont taking over that assignment for the second half of the game. That matchup would pay dividends in deciding the outcome Saturday.


Corey Mackin has had an electric start to his second season in the BCHL showing some great skill throughout the first four games of the season. It was on display Friday as he attempted a spin move for a backhand off the right wing side but was denied. His fortunes turned Saturday as he scored on the same move to give the Express a 2-1 lead with 1:32 remaining in the second period.


Penalty killing had been a key cog in the Express slow start to the season with the opposition striking eight times with the man advantage in the previous two games. Saturday was a much different story as the Express killed off all five Prince George advantages including a key penalty to Daniel Fritz to open up the third period.


Jake Lebrun pulled the visitors even as his wrist shot found it's way through the legs of Krogfross just past the 9 minute mark.


Wanting to get that first win meant the Express had to play it smart the rest of the way.


The line of Kerfoot, Lamont and Boyd got the key assignment in the final minute of the third period to match up against the top line for the Spruce Kings to at least preserve the tie and force overtime. But they did one better as Cody Boyd dished the puck off to Kerfoot who made a nice to drag into the middle and snapped his second of the season past Brooks-Potts with 20 seconds remaining in the third period to give the Express their first win of the season. Defenceman Nic Coltura drew the second assist as he finished the night with a pair of helpers.


Brayden Krogfross turned aside 29 shots to earn the victory in the Express crease.

It's a quick turn around for the Express who are back in action for a rare Tuesday night home game vs. the West Kelowna Warriors for the second time in 10 days.
Posted by Eddie Gregory at 12:15 PM