The Express reign as Fred Page Cup champions ended last night with a 4-2 loss in game 5 of the Mainland division semi final with the Chilliwack Chiefs. The Chiefs won the series 4 games to 1. Click here for boxscore

Braden Krogfoss got the call in game 5 for the Express between the pipes. Chris Tai was relived in game 4 after allowing 7 goals in 37 shots. Krogfoss who had a good finish to the season was tasked with keeping the Express close and try to help extend the season.

The most consistent trend in all 5 games of the series was the Chiefs opening the scoring. Jake Hand got Chilliwack on the board first banging home a rebound of a Vincent Desharnais point shot for his 4th of the series.

Another constant for the Chiefs in the series was their ability to score on the powerplay. Chilliwack struck at least once with a man up in every game. Scott Davidson kept that streak alive by digging out a loose puck out of a scrum behind Krogfoss and tuck the puck into the open net.

Chilliwack peppered the Express net with 19 shots in the first period.

With 40 minutes possibly left in their season the Express really began to drain the tank and fight for their playoff life.

That goal would spark the Express toward their best period of the series. The Express outshot the Chiefs 12-8. Their best chance on the night came when Corey Mackin came out from behind the net and zipped a pass across the crease and Brendan Lamont quickly snapped the pass by was completely robbed by the right leg of Scott Davidson who made his best save of the series.

The third period saw some of the bigger hits I've seen in the BCHL in recent years. Dustin Cave and Rory Bell two big boys collided hard at centre ice and the latter getting the worst of the hit. He was clearly wobbly and needed some attention on the ice before being helped to the room. That was followed minutes later by a hit by Colton Kerfoot as he came out of the penalty box.

In a 4 on 4 situation Brandon Potomak used his speed to get a step on the Express defence and throw the puck in front and Mason Boh playing in his second game of the series scored on the rebound for a 3-1 Chiefs lead with 7 minutes left.

Colton Kerfoot pulled the Express back within one scoring his first of the series on the powerplay with 2:36 to go.

The Express kept Krogfoss on the bench the rest of the way looking for the equalizer. It wasn't meant to be as Jordan Kawaguchi who torched the Express all season long scored his 11th goal regular season and playoffs into the empty net in the final minute to seal it. It's somewhat fitting he got the goal considering he scored 4 goals in the series and they all were big goals. Two of them opened the scoring.

Braden Krogfoss turned aside 44 of the 47 shots sent his way in game 5. He did everything that was asked of him in game 5 to give the Express the goaltending they needed to have a chance in a do or die game 5.

It just wasn't meant to be for the Express in 2015. The season didn't go as long as it did a year ago. But the Express fought like champions this season. It was a tough go for the Express with all the roster turnover from the previous season to the most recently completed year. They won just 3 of their first 16 games. But some personnel changes in the first few months of the season turned the season around.

All the players battled hard in the final four months of the season to make the Express one of the better teams in the BCHL by the time the final month of the regular season rolled around. The Express had a chance to finish the year above .500 if they took their final two games of the regular season. To put themselves in that position after their start was quite remarkable. 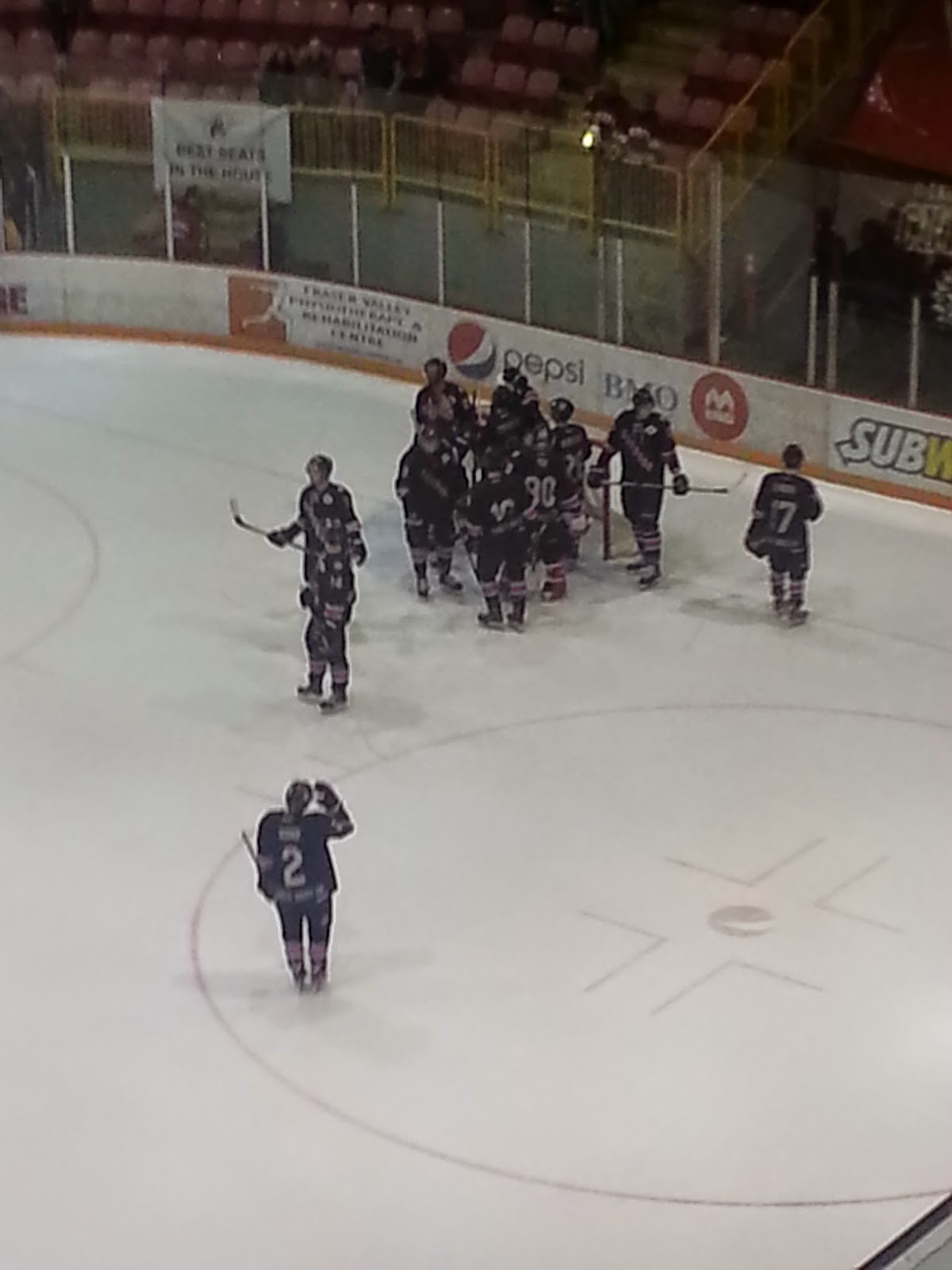 Individually Corey Mackin and Brett Supinski, their 50 and 48 goal seasons will be remembered for years to come.

Thanks to all the players who busted their tails all season long. And gave their blood, sweat tears and pain for the Express uniform.

For the players moving on, one memorable chapter of their lives closes and another one will soon begin.

For the returnees, they all showed signs of what's to come for next season when the opportunity will present itself.

It's only March, but it won't be long until we're back in Chilliwack in September again for another Express season starting at the showcase.

I would personally like to take this chance to thank everyone who took time to check out the blog and listen to Gord and I during the broadcasts this season.
Posted by Eddie Gregory at 9:56 PM

Just a thank you from out here in PA for your game calls, your blog and your support. You do a really fine job of covering the express and those of us with grandsons 3000 miles away appreciate your efforts..
Thanks again
Paul Supinski