The Coquitlam Express are proud to announce Captain Jackson Cressey (96) has committed to play for Ivy League school the Princeton Tigers for the 2016-17 season. The Division One program located in Princeton New Jersey, plays in the ECAC Hockey Division.

Cressey, a West Vancouver native is in his third BCHL season. He was named Express captain prior to the 2015-16 season. As of Monday, Cressey led the Express in scoring with 11 goals and 25 points in 17 games. Those numbers currently rank him 5th in BCHL scoring. He's been very consistent this season picking up points in 15 of 17 games. He also has 7 multiple point games this season.

Cressey's 11 goals this season match his career high set last season in 52 games. He began his Express career as an AP during the 2012-13 season scoring 3 goals in 10 games. In 135 career games all with the Express he has 31 goals and 48 assists for 79 points.

During his first full season with the Express in 2013-14 Cressey won the Fred Page Cup BCHL championship and played in the Western Canada Cup in Dauphin Manitoba.

"The Tigers just got better with Jackson’s commitment, his leadership, character and work ethic will be welcomed to any program and will be a great addition to the Princeton team and school.
We are very proud of Jackson, and that he is a member of the Express! We thank him for all he has done for the Express program." - Express Head Coach & GM Barry Wolff 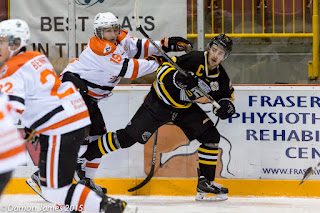 Posted by Eddie Gregory at 6:15 PM