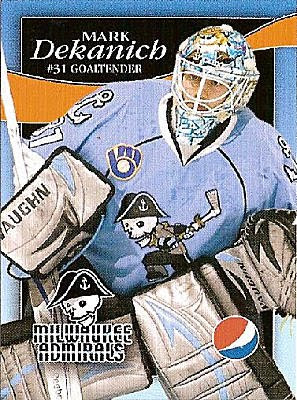 Former Express and Nashville Predators draft pick Mark Dekanich has been sent from the AHL's Milwaukee Admirals to the ECHL's Cincinatti Cyclones.

Since the demotion, Dekanich has posted a 2-0 record. He stopped 24 shots in a 2-1 win over the Flordia Everblades Friday night. Then in the rematch Saturday, Dekanich did one better stopping all 27 shots to post the shutout in a 3-0 win.

Yip is teammates with one of his former mates with the Express, Brock Bradford is 3rd in Lake Erie scoring with 12 points in 23 games. Bradford played with the Express from 02-04. Then went to the USHL to finish his junior career.

From there, Bradford was off to Boston College for 4 seasons. He won a National championship in his 3rd season at BC, and was the team captain last season. Bradford who was drafted by Boston in 2005 never signed with the Bruins after his college career.

Kyle Turris had a pair of assists but it wasn't enough as his San Antonio Rampage fell to the Houston Aeros 3-2 Friday night. He has 5 goals and 11 assists for 16 points in 22 games.

Keith Seabrook scored 1 goal for the Abbotsford Heat as they took care of the Rochester Americans 6-2 Saturday night in the Fraser Valley. This season Seabrook has 6 goals and 6 assists in 28 games.

Paul Crowder has 6 goals and 5 assists in 25 games with the Hartford Wolf Pack. Saturday the Wolf Pack went down 4-1 to the Wilkes-Barre/Scranton Penguins.
Posted by Eddie Gregory at 11:30 PM

Thought your tone was a bit sensational (Enquirer). May want to post a little less clinical and more supportive of our Express Grads, JMHO

Someone's a little too thin skinned. The blogpost isn't being sensationalist nor overly negative, just noting that MDekanich has been sent down, here's possibly why.
I'd say this site is pretty supportive of express grads, more than any other site. Of course if you just want a cheerleading section, maybe you should set one up yourself.