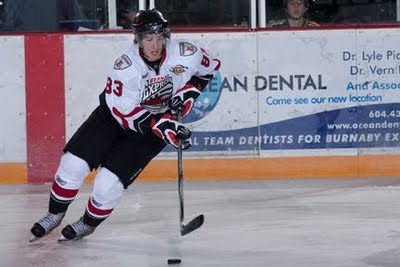 The Express picked up 3 out of 4 possible points this weekend after falling 4-3 in overtime to the Surrey Eagles Saturday night. That result comes 24 hours after a dramatic 5-4 win for the Express over Victoria Friday.

Burnaby has now picked up points in 3 of their last 4 games. The only game in that span where the Express didn't pick up points was last Sunday vs. the Cowichan Valley Capitals.

The red hot Rich Manley opened the scoring on one of the most beautiful goals you will see this season in the BCHL.

With the Express shorthanded, Brad Reid broke away with Manley, Reid came down the left wing lost his footing as he entered Surrey's zone, he was still able to dish the puck across the puck to Manley who knocked the puck out of the air and past Vinny Lessard.

The goal for Manley was his 5th in his last two games. That goal comes after Manley's first career 4 goal game in junior 24 hours earlier vs. Victoria.

Burnaby opened the 2nd period with a 2 man advantage for a full 2 minutes with Surrey being assessd a roughing penalty to Wes Vannieuwenhuizen and a bench minor at the 20:00 mark of the first period following some rough stuff at the horn.

Jimmy Geerin added to Burnaby's lead on the powerplay as he blasted home his 4th of the season to give the Express a 2-0 lead just 39 seconds into the second period.

The goal for Geerin extended his point streak to 4 games. (3G, 2A). Furthermore, Geerin has 3 goals and 6 assists for 9 points in his 11 games.

Surrey cut into Burnaby's lead midway through the 2nd period as Jason Grecica chipped the puck over Nick Enegren at 11:15.

Then in the final minute of the 2nd period the Eagles pulled even. Chris Santiago jammed the puck under Nick Enegren who was lying on the ice but behind his goal line and the powerplay goal saw the two teams head to the third period tied at 2.

It didn't take long for the Eagles to take their first lead of the game in the third period. Mike Krgovich came down the left wing and put a perfect pass on the tape of Grant Toulmin who had a tap in on a 2 on 1 break to give Surrey a 3-2 lead just 36 seconds into the third period.

The goal didn't rattle the recenlty resiliant Express. James Bettauer pulled the Express even less than 4 minutes later as his blast changed directions on Vinny Lessard and dribbled in to tie the game at 3.

The Express have now erased a third period deficit in 3 of their last 4 games.

For the 2nd straight meeting between these two teams at the Bill Copeland Sports Centre, Vinny Lessard was the difference between the Express and victory. He stopped 34 of 35 Express shots in a 2-1 Surrey win on October 17th. On this night, Lessard stopped 39 of 42 Express shots through 60 minutes as the teams went to overtime.

The extra session didn't last long as the Eagles controlled the puck in the opening minute of overtime in the Express zone, they bided their time and Adam Basford found Cole Gelly pinching in and the Eagles defenceman made no mistake picking the top corner on Nick Enegren for Gelley's 1st goal of the season on the only shot of overtime at 1:03 to give Surrey the 4-3 win.

The encouraging sign for the Express is the amount of rubber they've directed towards the oppostion goal the last 2 games. 42 Saturday vs. Surrey and 49 Friday vs. Victoria for 91 total shots on goal in the last 2 games.

It's also encouraging to see the Express show the ablity to come from behind in the third period for the 3rd time in the last 4 games.

In the race for the playoffs, the Express did fall one point back of Cowichan Valley as they knocked off the Prince George Spruce Kings 3-2 Saturday night. The Caps will wrap up their northern road trip Sunday afternoon in Williams Lake.

The expansion Timberwolves will be Burnaby's next opponent as they will pay a visit to the Bill Copeland Sports Centre Wednesday night. Then the pre-christmas schedule will wrap up for the Express Friday night when the Express host Jacob Verheyden and the Quesnel Millionaires.
Posted by Eddie Gregory at 8:14 AM