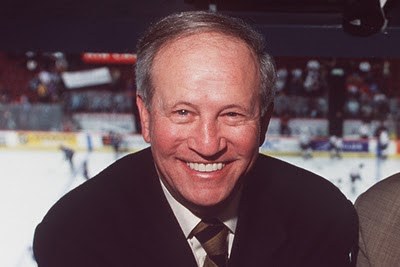 Whether I was a youngster listening to Canuck games on CKNW or watching the simulcast on BCTV or working behind the scenes of Canuck broadcasts at Team 1040, there has always been one constant. And that's Tom Larscheid.

He is retiring after the Canucks season opener on October 9th vs. Los Angeles. A career that dates back to the late 70's when he joined Jim Robson in the booth.

The one thing that stands out for me listening to him all these years is the passion he brought to the booth every single game. His energy is something that i'm sure we all wish we had.

Tommy loved the Canucks and wanted nothing more than the Canucks to win. He would praise them when they did well. But wasn't afraid to criticize when the team was playing poorly.

All the while doing it with a style and flair that truly made him one of a kind. That is one thing I will always remember about Tom. There is only one, and ever will only be one Tom Larscheid. No one will ever be able to genuinely match that enthusiasm.

His one liners on the air are too many to mention, whether it be "bingo bango bongo, his name is Roberto Luongo!" or helping give Jeff Cowan the nickname of the brabarian. I know i'm forgetting so many from his career but you get the idea.

I can tell you from getting to know him a little since the Canucks broadcasts have been on Team 1040 coming over from CKNW, Tom is the same person off the air as he is on it. A class act who is always in a fantastic mood.

Usually during a break I would ask Tommy how he was doing, and he would respond i'm doing great. But I would mainly want to do it to get a great reaction from Tom.

One time i'll never forget is after the first break of the first period of game 2 in this years playoffs vs. Chicago, the Canucks were up 1-0 in the series and got off to a fantastic start leading 2-0 and dominating the play and I asked Tom how he was doing to get the reaction, and he was over the moon with excitement.

I just want to say thank you Tom for all the great work you've brought to the Canucks broadcasts over your career. It was always entertaining, it was honest, and more importantly, it was from the heart. I wish you all the best in your retirement.

There's only one stop remaining and that is the Hockey Hall of Fame as a recipient of the Foster Hewitt award along side your longtime partner in the hall Jim Robson.
Posted by Eddie Gregory at 10:11 AM