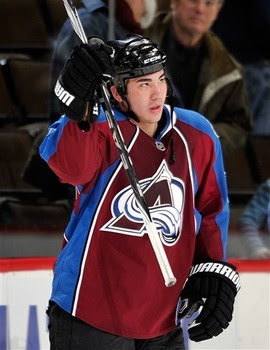 Former Express Brandon Yip has signed a new contract with the Colorado Avalanche.

The Colorado Avalanche Hockey Club announced today that the team has signed forward Brandon Yip to a two-year contract through the 2011-12 season. Yip was a restricted free-agent.

Yip, 25, was recalled by the Avalanche on Dec. 18 of last year and went on to tally 11 goals and 19 points (11g/8a) in 32 games during his rookie campaign. He finished first among all NHL rookies in goals-per-game at 0.34. The 6-foot-1, 180-pound right wing also appeared in all six playoff games for Colorado, recording two goals and two assists to rank second on the team in postseason scoring with four points.

“We’re pleased to have Brandon under contract,” said Avalanche General Manager/Executive Vice President Greg Sherman. “With his energy and style of play, we think he can be a solid player for our team.”

The Vancouver, B.C., native missed the first two months of the 2009-10 season due to a hand injury he suffered during a preseason game on Sept. 18. He made his professional debut with the Lake Erie Monsters (AHL) on Dec. 1 and his NHL debut on Dec. 19. After going pointless in his first two contests with Colorado, Yip tallied 11 goals and 18 points in his next 20 games. He later missed 14 games from March 3-31 due to a shoulder injury.

Selected by the Avalanche in the eighth round (239th overall) of the 2004 Entry Draft, Yip played four seasons at Boston University (Hockey East), where he helped lead the Terriers to the 2009 NCAA Championship.
Posted by Eddie Gregory at 4:15 PM